The Smith River, limestone walls, trout, and not much else. 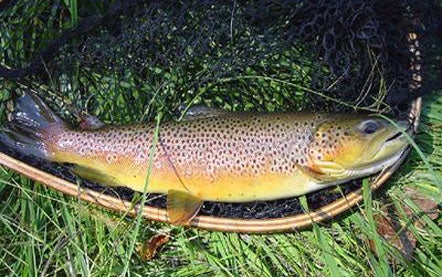 “Looks like the Zambezi River.” The man spoke with a South African accent and was huddled in a slicker on the put-in bridge, watching water boil around the pilings below. “Uprooted trees, drowned livestock, everything but the bloody crocs,” he said. For most of the year, the clouds that cast shadows across the Smith River canyon in a dry basin of west-central Montana deliver no rain. But not in May. The morning of our launch on Memorial Day weekend, we had driven gravel roads to the river through a downpour. The South African shook his head at the rafting gear piled high on our truck. “a good float trip. Looks like it’s going to be a fast one.”

It was an inauspicious beginning for a five-day trip, but on the Smith you take the water when you can get it, any way you can get it, even if you can’t see your boots half a foot under the surface. This was an inaugural trip for the other members of the party, including my wife, daughter, and son. I knew whatever reservations they had at that moment would fade as their eyes drifted up to the soaring cliffs that would border every pool and riffle for the next 40 miles. Composed of limestone rock nearly 500 million years old, these thousand-foot walls reflect a palette of light, featuring colors like gold, tangerine, chalk, and champagne. The canyon contributes as much to the river’s renown as the brown and rainbow trout that teem in its currents.

Although 70 percent of this river stretch is privately owned, rugged topography has protected all but a few miles from development. It is a haven for wildlife. On that first day alone we would see beaver, black bear, deer, moose, and hundreds of gosling geese trailing their mothers like long commas. At one early bend, an otter popped out of the water holding a squirming trout in its mouth-proof that it was in fact possible to catch fish in coffee-colored water.

A few miles downriver from the put-in, I took up my rod and knotted on a “what-the-hell fly”-a purple Woolly Bugger with a black marabou tail-that had been tied by an old friend whose ashes were scattered here the previous year. Jim Belsey had called this river the Holy Water, and when an 18-inch brown bolted from the surface on my fourth or fifth cast, I imagined Jim winking in approval. Though the fishing would pick up from that point forward, this buttery brown turned out to be the biggest fish of the trip, with a strong jawline and a belly the color of a lemon drop.

It’s a good idea to carry both fly tackle and spinning gear on this float because water conditions can change rapidly. I tend to stick with the long rod, but when the river is dirty, a Panther Martin swum through the eddies and side channels produces a flash that fish can see. It will catch dinner when fur and feathers won’t.

[NEXT “One of the most common mistakes…”] One of the most common mistakes that first timers make on this river is spending too much time at the oars and not enough in fishing, hunting for morel mushrooms, and exploring caves painted with Indian pictographs that are a few thousand years old. Don’t try to cover more than 20 miles a day in high water, or more than 12 in low water. With the exception of a few Class II rapids, the Smith is not technical water, but exposed boulders, tight turns, and currents that push you toward the cliffs require experience and constant diligence.

Campgrounds along the Smith are assigned by rangers at the put-in. Our first site was near a spring that cascaded down a rock wall over a bed of watercress; our second and third were opposite overhangs that glowed the color of honey at sunrise; and our last camp was just below a meadow where a flock of wild turkeys strutted and clucked throughout the morning.

In the evenings, we would sit around a fire and watch the canyon drain of color before we went to bed. Twice our sleep was interrupted by pillaging raccoons, which are notorious in these partts for being so nimble of finger that they can open coolers and even unzip tents. When dawn broke, I’d bake biscuits in the Dutch oven with campfire coals and check the water level against a stick I had left in the river-edge soil overnight.

The river receded farther every morning, the current ran clearer every afternoon, and the fishing improved. But each day, that mattered a little less. Sheer wonder at the architecture of this place is almost enough to distract you from those subtle tugs on the end of your line.

It is only during the last 20 miles of the trip, when the Smith runs out of the canyon and between barbed wire fences on windswept escarpments, that you begin to emerge from its spell. Cattle roam the adjacent fields. Lambs and ewes with matching numbers sprayed on their wool blink at you through eyes swarming with flies. On the last stretch of our float, our photographer’s wife, Lorca Smetana, hung her Rapala up on the bank, and when she climbed onto shore to retrieve it, she came face-to-face with a buzzing prairie rattlesnake. It seemed to be a not-so-gentle hint that it was time for us to go home.