Where to hide from a summer killer. 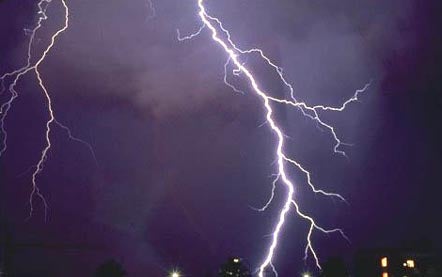 A lightning bolt is like a snakebite. Either can occur without warning, but most often the strike, whether it carries 100 million volts of electricity or a few drops of paralyzing venom, is preceded by ample signs of danger. By noting these and taking prompt action, hunters and fishermen can avoid becoming victim to a weather hazard that claims upwards of 100 fatalities each year in the United States.

Bolt Coming
Most lightning strikes occur at the beginning and end of afternoon storms. This is when positive and negative charges, which collide to produce the flash between clouds and the ground, build up the most electricity. Thunder (see sidebar), the sound waves produced by the explosive heating of air in the lightning channel, is the obvious omen we need to heed, but there are many other warning signs. Darkening skies, the buildup of anvil-shaped cumulonimbus clouds, and a sudden drop in temperature and increase in wind often presage the storms that are most likely to produce lightning. Immediately preceding a bolt, low levels of electricity fill the air, causing phenomena such as the hair on your body standing on end, a tingling sensation on the skin, or a metallic taste in your mouth. If you experience any of these, a strike is imminent.

**Where to Hide **
Because the positive charge in the ground seeks the shortest route to the negative charge of the cloud, lightning is most likely to strike the highest objects. Getting down from the ridgeline or off the water if you’re boating is the most important safety measure you can take to avoid a strike.

If you’re caught in a lightning storm, immediately discard metal and graphite objects such as backpacks and fishing rods, which conduct electricity. Leave open ground and seek shelter among bushes or rocks of uniform size. Avoid tall, tapering trees or damp depressions, which can conduct ground electricity from a strike that may land hundreds of feet away. Squat like a catcher with your feet together and bend forward to keep your head low; don’t touch the ground with any other part of your body. Because lightning travels around the outside of vehicles and metal sheds, stay away from them unless you can safely get inside. The same goes for fencelines and tents with metal poles. If you’re in a group, split up but don’t separate so far that you lose eye contact. That way, the lightning is less likely to strike the entire party, leaving the uninjured to attend any who are struck.

[NEXT “Story Continued…”] Resurrect the Dead
Victims of lightning strikes don’t retain an electrical charge and are safe to touch. Those who are breathing on their own and have a pulse are likely to survive. Unlike most emergencies, treat the apparently dead first. Administer rescue breathing if the victim is not breathing on his own but has a pulse. If you can’t feel a pulse either, proceed to full cardiopulmonary resuscitation (CPR). Do not be discouraged by the ashen visage of the victim. Send a member of your party for help and don’t give up until it arrives. Lightning victims have been revived after showing no signs of life for more than an hour. Despite lightning’s power, humans have an amazing ability to survive, especially when we use our heads and avoid getting struck in the first place.

Death on the Water
Boating anglers are the sportsmen most likely to be struck by lightning. To avoid getting hit, follow these guidelines. 1. Heed radio reports from the National Weather Service and get off the water at the first sign of a storm. Don’t delay-lightning storms move at 20 mph. 2. Tying up under tall trees or rocky cliffs at the water’s edge can be more dangerous than staying on open water. Get away from your boat and take cover in low shrubs. 3. If you are caught by a storm, sit low in the boat or in its cabin. Keep arms and legs inside the boat. 4. **Discoonnect and then do not touch electrical equipment. **5. Lay down protruding objects like masts, rods, or antennae. **6. **Lightning protection systems are built into many larger boats. Smaller craft can be protected with a portable system, consisting of a mast, a flexible copper cable, and a metal ground plate that you drop overboard when the storm approaches.