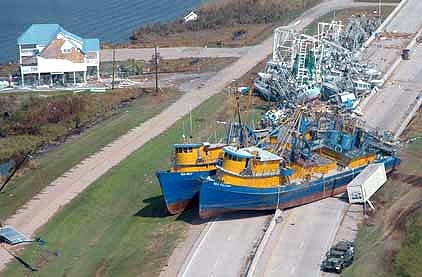 Even if I were blind, the odors rising through the open window of the float plane 300 feet up in the humid sky would tell me what has happened to the string of fishing towns south of New Orleans. But I’m not blind, so I have to look, and my worst fears are confirmed. There is death everywhere on my cherished delta. Human, animal and cultural.

I wish I only saw debris, but it is worse. The towns in Plaquemines Parish, built on the thin strip of land between the Mississippi River levee on the east and the so-called hurricane protection levee on the west, have been reduced to rafts of trash and animal corpses floating in a putrid black sea. The water is a gumbo of storm surge mixed with the drainings of fractured sewage plants, split tanks from oil storage depots and broken refineries. The marinas that were on the marshes to the west of the river have been annihilated. All buildings have been crushed or washed away.

Just below Empire sits a testimony to the power of the massive storm surge that inundated this land; two 100-foot commercial menhaden trawlers lying across Louisiana Highway 23. For 50 miles up and down the river, dozens of shrimp trawlers, oyster luggers, and sportsfishing yachts are jammed into corners of communities or left high and dry on the marsh.

Buras is no better. Venice, one of the great fishing ports in the world, is demolished.

On the east side of the river, Blackie Campo’s Shell Beach hoist, a landmark that had launched tens of thousands of anglers and weathered dozens of storms over the decades, has been flattened. Only slabs remain where homes once stood for more than 100 years.

Vince Guillory, a fisheries biologist with the Louisiana Department of Wildlife and Fisheries, knows what these scenes mean.

“We’re talking about assessments of the damage? It’s complete, total.”

State officials tallying the damage used dollar figures: $200 million for the recreational industry; $1.3 billion on the commercial side. Those figures are just for this year. They’re impressive, but they miss a vital point.

Fishing isn’t simply a sport here. It’s deeply woven into our special way of life, as much as part of the uniquely crazy culture of my home town as Mardi Gras and Jazz. It cuts across all social lines; bankers and bricklayers, bluebloods and street hustlers launch and fish the same spots, often at the same time, sometimes together. It provides a common language understood from the Garden District to The Treme.

Because of that I have a feeling, deep down inside, these towns will rise again, fishing will resume. But it will be one long, dirty, job.