A globe-trotting angler's guide to his home river. 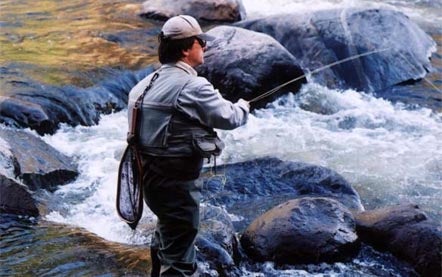 After the 2004 presidential election, Tom Brokaw will retire from NBC’s Nightly News, turning the final chapter on one of the most distinguished careers in broadcast journalism. So what does he plan to do with all his free time? “I’m going to disappear into the wild for a while,” he says. It will be a natural transition. Brokaw, who grew up in South Dakota, is a lifelong outdoorsman. He trains his Labrador retrievers every morning in Central Park and hunts birds in upstate New York. But he’s most passionate about fishing, a sport he has chased all over the globe, from Labrador to Russia. His favorite spot, however, is a historic river not too far from his ranch in Montana: the Yellowstone. Here is his guide.

**Why It’s Great **
“First of all, the fishing is almost always excellent. I’ve never made it out for the Mother’s Day caddis hatch, but I’ve received maddening e-mails about it. I generally fish in July and August, using a big attractor that the fish can see and occasionally going deep with streamers and nymphs. The other thing is that you’re just 10 minutes off the interstate, and you can absolutely disappear. You’ll see moose, eagles, and egrets, and a lot of it is unfenced so you have this real sense of 19th-century Montana on this primal, undammed river. I always think of William Clark going back home on that river, floating down to the Missouri.”

Hotspots “I love to float the Livingston to Big Timber stretch. I probably shouldn’t be giving this away, but most people float through Paradise Valley to Livingston. Downstream, there are fewer boats. You can stop and have lunch on a sandbar and it will be just you and the willows.”

**Favorite Guides
** “I fish with Steve Pauli in Big Timber [BRACKET “Sweet Cast Anglers, 406-932-4469”] and George Anderson at Yellowstone Angler [BRACKET “406-222-7130″]. Both guys really know the river. George even lets me row the boat, something I did as a kid on the Missouri. Holding the boat at a 45-degree angle to the bank, drifting along, and getting the angler a shot at everything is a tricky business. There’s a picture of me rowing, with George in the bow and Howell Raines in the stern. I blew it up and sent it to George and wrote: ¿¿¿Dear Mr. Anderson: I always heard you were a wonderful guide and I really loved our day together. But do you think next year there’s a chance I can do some fishing?’ He loved it.”