Hometown: Richmond, Virginia Age: 18 years old Read Peter’s Story… I was having a rough season--but was determined to kill... 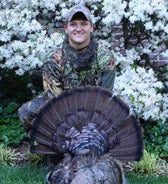