Hometown: Jasper, Indiana Age: 15 years old Read Ryan’s Story… The greatest gobbler hunt of my life would have to... 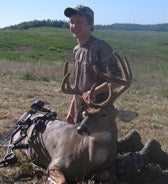