A dream destination for the do-it-yourself elk hunter. 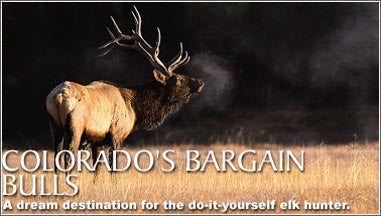 On the third day of their Colorado blackpowder elk hunt, Iowan Dave Kallsen and his friends woke to 8 inches of fresh snow blanketing the mountainside they shared only with the game. The four hunters split up, two of them cutting a fresh track, the other pair climbing to the treeline, making a long loop to circle ahead of a herd of 70 elk. By noon, they had two bulls down, a 4×5 and a 5×5.

You can pay a lot for such an experience, but it’s not necessary. Kallsen and his friends make their annual trip for around $800 per person, the bulk of which is the fee for Colorado’s nonresident elk tag. Kallsen views the cost philosophically. “It’s worth $500 just to camp in the mountains,” he says. “The elk hunting is a bonus.” Work the application process and build up enough preference points to succeed in a limited drawing, however, and that “bonus” can turn into the hunt of a lifetime.

The Plan
Start before the April 1 deadline and study the Colorado Division of Wildlife’s Big Game hunting season application booklet (303-297-1192; www.wildlife.state.co.us), as well as national forest, BLM, and USGS maps. To make sense of the state’s nearly 200 management units, look at the Hunt Recap pages on the agency’s website. There you’ll find unit-by-unit information on applicant numbers, hunting pressure, success rates, and the preference points needed to draw limited tags. Applicants who don’t get their first choice of a limited unit earn a preference point for the next year’s drawing. You can also simply put in for a point without applying for a tag.

** Over-the-Counter Hunting**
As they accumulated points for a blackpowder hunt, Kallsen and his friends bought over-the-counter archery tags and taught themselves to hunt elk (over-the-counter rifle tags are also available for many units).

Although they were able to make camp right next to their 4×4 pickup last year, Kallsen’s group is always ready to trek their way in. “We go out with our packs loaded. Some years, we’ve had to hike 6 miles off the road to find elk and get away from other hunters.” If your hunt is sucessful, you can usually find a local who will hire out a four-wheeler or horses for big packing jobs. “Every year when we bowhunted we saw bulls we could have killed with muzzleloaders,” says Kallsen. Last year the group blew their points on the blackpowder hunt they had dreamed of for five years. True, neither bull they tagged on that snowy morning made the record book, but Kallsen could care less. “We wouldn’t trade our seasons in the mountains and two little bulls for anything. The hunts you do on your own are the ones you remember the most.”