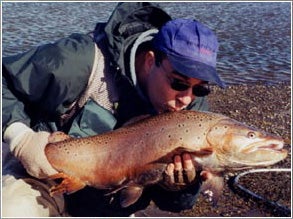 16 Something fishy has been going on as real-estate development has rampaged up and down the Sacramento River drainage upstream from San Francisco.

“Salmon and striped bass took a hit, but almost everything that’s bad for those fish in the SacramentoÂ¿Â¿Â¿San Joaquin Delta has been an advantage for largemouth bass,” says Dennis Lee, California’s warmwater fisheries manager. “I’m amazed at how many people don’t know there are tons of bass out there. The Florida-strain largemouths that were stocked in the 1980s are ranging to 18 pounds, and I don’t think they’ve peaked.”

Anglers still find salmon and sturgeon action in the delta, which sprawls through five counties. Conservation measures are also rebuilding striped bass numbers. Striper fishing can be excellent in April when they stack up at the mouths of spawning tributaries, and again in June, when stripers go on the feed as they drop back into San Francisco Bay.

But as any of the region’s bass anglers will confirm, largemouths rule the delta. “For largemouths, it’s absolutely the best fishery around for average size,” Lee says.

17 The Skykomish River is famous for steelhead that rise to flies and smack lures in the lovely July weather on the west slope of the Cascades, although the river also has a great winter run that enables steelheaders to relish the cold misery to which they are accustomed.

The current era of endangered stocks and the river’s proximity to the Seattle metro area translate into seasons that can change at a moment’s notice, depending on fish counts. That’s not a deterrent to savvy anglers within reach of a river with four salmon species, good boat access, and shore access. Staying legal is as easy as calling the Washington Department of Fish and Wildlife rule-change hotline at 360-902-2500.

Sweet Spots: Holes at the Wallace River bridge near Startup for steelhead and salmon; Reiter Ponds area near Gold Bar for steelhead
What’s Hot: Marabou jigs, plastic leeches, fresh sand shrimp
Local Advice: “Instead of letting the dogs [BRACKET “chum salmon”] destroy your Kwikfish or other expensive plugs, just tie yarn or anything else that’s green and purple and cheap onto a hook, and they’ll attack it,” says Gary Perkins, a longtime Skykomish angler from Sultan. “They’re fun to fight, but one dog with those alligator teeth can ruin a $6 plug with one chomp.”
Prime Time: Early July for chinooks, July through October for summer steelhead, January for winter steelhead
More Info: Snohomish County Tourism Bureau, 888-338-0976; www.snohomish.org

18 The good old days of anadromous fish runs have never faded on theogue River, which attracts some of the West Coast’s strongest returns of wild steelhead and chinook salmon, plus hatchery stocks.

An angler who starts fishing with an arsenal of rods at the river’s mouth could go a lifetime and never find a reason to explore the entire 215 miles up to the headwaters at Crater Lake National Park.

19 State-record rainbows are caught with regularity in this 51-mile-long Columbia River reservoir behind Chief Joseph Dam. The reasons, however, aren’t entirely natural.

Fishing in Lake Rufus Woods is enhanced by a commercial net-pen operation about 16 miles downstream from Grand Coulee Dam. Genetically altered (triploid) rainbows are raised for market here, but thousands of the sterile fish, which grow to sumo wrestler proportions, are released for anglers. Walleye fishing can be good along the eddy lines when water is being released from Grand Coulee. Otherwise, troll spinners to search for them in midriver depressions as deep as 60 feet.

Sweet Spot: The buoy line above Chief Joseph Dam, good for both rainbows and kokanees
What’s Hot: PowerBait enhanced with nightcrawlers fished off the bottom for big rainbows
Local Advice: “You can tell when somebody’s new here because they’ll keep the first 5-pounder they catch,” says one local. “We break those little ones off.”
Prime Time: January and February for rainbows
Record Fish: 29.6-pound rainbow caught by Norm Butler of Okanogan, Washington, one of two state-record rainbows caught here in 2002
More Info: Grand Coulee Dam Area Chamber of Commerce, 800-268-5332; www.grandcouleedam.org

20 Kokanee salmon anglers are known for keeping secrets, but they couldn’t hide the size of the silvers they were hauling out of 3,220-acre Whiskeytown Reservoir last year. Just 15 minutes off Interstate 5 at Redding, the lake is stocked with brook trout, and the fishing can also be good for spotted, largemouth, and smallmouth bass, especially on summer evenings after recreational boating has subsided. Bass hang around underwater islands that are conveniently marked with buoys. Whiskeytown isn’t as big or productive year after year as nearby Shasta Lake, but this season, with another year class of kokanees reaching lunker status, it should be worth a road trip.