One fisherman's struggle with an embarrassing problem 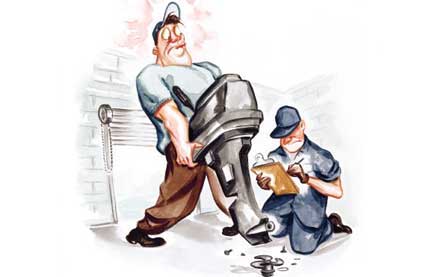 So, after weeks of trying to solve this problem on my own–and believe me, I tried just about everything short of giving it a good thump with a hammer–and not wishing to go through the rest of my life plagued by a Johnson that works erratically at best, I hauled my Johnson into a certified outboard motor repair shop.

It’s not that I don’t have great respect for the fine Johnson Motors company in Waukegan, Illinois. I think it makes a terrific product. My 40-horsepower outboard is now 25 years old, and it’s seen some impressive sights. I don’t want to brag, but I’ve had my Johnson in just about every lake in Colorado.

Until recently, my Johnson would purr along like a really big kitten.

But last fall, my Johnson began showing signs of aging. First it sputtered. Then it just seemed to lose its zip. Finally, near the end of September on a breathtaking Rocky Mountain day on Ruedi Reservoir near Aspen, my Johnson just died on me.

I towed my boat and motor into the ski resort town and discovered that there isn’t a single outboard motor shop in Aspen. Dejected, I finished off my $84 tuna sandwich, climbed back into my truck, and hit the road, dragging my big, sorry Johnson behind me.

Back home late that night, my wife sensed my depression. “It’s your Johnson, isn’t it?” she asked. I said I was, indeed, having some serious problems with it but I remained optimistic that I could get it taken care of. Susie shot me a sympathetic look and disappeared down the hallway, leaving behind: (1) a trail of great howling laughter and (2) a guy whose Johnson had seen better days.

Fishing season was over, and the winter passed. Spring came with its promise of renewal, and my thoughts turned once again to my Johnson. I hitched up the boat and took it to my local boat shop in Colorado Springs. The parking lot was crowded. I wasn’t the only guy with a malfunctioning Johnson.

Inside the shop, I scanned the crowd and listened. Some guys had no Johnson at all. They had Evinrudes and Mercurys and other kinds of outboard motors. The rest of us gathered in a corner and compared notes.

Guys can be pretty damn proud of their Johnsons.

“My Johnson has been worry-free,” chimed in Dennis.

And then Roger spoke up. “My Johnson,” he said quietly, “starts okay, but then it makes loud grinding noises and dies.”

A repairman darted around with a clipboard, taking names and offering some general tips. “They can be temperamental,” he said. “But take care of ’em, and a Johnson will last a lifetime.” Bob, Dennis, Roger, and I perked up when we heard that.

The repairman got to me. “What’s the problem?” he asked.

“Well,” I said, trying to avoid direct eye contact, “right now my Johnson doesn’t work at all. For a while it acted strange. Cold mornings were the worst. It lost power. Once, last September, my Johnson even backfired.”

The repairman’s eyebrows went up. “How old is your Johnson?” he asked.

“Got it new in ’79,” I said. “Looked around for some used ones, but back then not many guys were willing to give up their Johnsons.”

He said not much has changed over the years in that regard.

Moments later he walked outside with me, pushing an outboard motor dolly. We gently unhooked my engine from the boat and together hoisted it onto the dolly as the repairman let out a grunt. My Johnson is pretty darn heavy.

Then he turned and wheeled it back into his shop. He said he’d call in a week or so. I walked toward my truck and fought back a tear, afraid the other guys would see me. As I drove awaay, I waved good-bye to my Johnson.

I hope I get it back.