Camping With My Wife

Sometimes the call of the wild is best left unanswered. 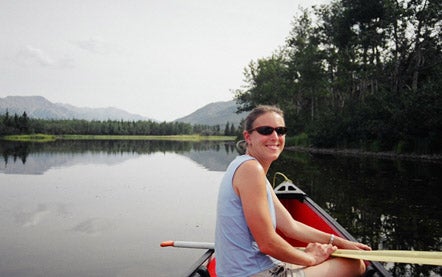 I recently made my first visit to Northern Minnesota’s Boundary Waters Canoe Area Wilderness-a name chosen in 1958 because it reflects the pristine environment of the million-acre paradise, and also because Louisiana already had dibs on “Mosquito-Infested Swampland.”

Along on this backcountry adventure was my wife. Susie is not exactly what you’d call an outdoors person, in the sense that she had never actually been in the woods. Okay, that’s not entirely true. We’d camped once previously, for one night. I slept, to use the old expression, like a guy trying to watch C-SPAN. But Susie was up all night, frightened, she said, because she heard an owl “bugle.”

Our preparations for this once-in-a-lifetime-if there is a God-wilderness journey had begun months earlier. Our friends Bill and Cary were planning their Boundary Waters excursion, and one night Bill, who is pretty smart and likes to speak in an eloquent way, asked how we would feel about “paddling near panoramic Canada.” I answered with an emphatic “Oh boy! Would I ever!” because I’d been drinking and thought he’d said “cuddling with Pamela Anderson.”

Planning for the trip went smoothly through the winter and into the spring. By this I mean that Cary did everything. She was in weekly contact with North Country Canoe Outfitters in Ely, Minnesota, and did it all, from plotting our route (one bug-plagued lake after another until we’d become tired and lost and begin to hate each other) to obtaining the wilderness permits. She even laid out, in great detail, our freeze-dried menu. My favorite was the beef stroganoff, which is a Russian word meaning “better leave the tent flaps open.”

Susie, meanwhile, passed the months by talking about her concerns. Would she, for example, have to go to the bathroom in the woods? I eased her mind by saying, “No, honey. The outfitter will canoe to our camp each morning, towing a full bathroom on a barge.” I laughed about my answer long into the night. This really bothered our cat, who was also sleeping on the couch.

[NEXT “Story Continued…”] Two weeks before we left, Susie began packing. When she asked how many pairs of shoes she could bring, I told her to bring them all and we’d just “hire one of those C-130 fire-fighting airplanes to drop them over our camp.” As soon as the words were out of my mouth, the cat rolled his eyes and headed downstairs to the couch. Just days before our departure, when Susie asked if she could bring a pillow, I offered another helpful suggestion, and the cat actually unfolded the quilt for me.

Soon, the big day arrived. Susie and I flew from Colorado to Duluth, a lovely mining and shipping town nestled on the shore of Lake Superior and a terrific place to visit if you want to watch a tugboat rust. We were met there by Bill and Cary, and soon were in Ely, the gateway to the Boundary Waters. Ely smells like Deet. It’s a remote outpost of a town settled in the late 1800s by hardy northern Europeans-heavyset people with enormous shoulders and thick, hairy legs who arrived in that harsh land and, after realizing they could make a living by trapping wolverines, sent for their husbands. Then every family in town opened a T-shirt store.

We were greeted at North Country Canoe by a strapping young guide named Jake. He showed us the proper technique for hoisting a canoe, and I mastered the move on my very first attempt. I grasped the shiny, new $1,800 Kevlar craft firmly by the middle braces, lifted it onto my thigh and then, in one smooth and graceful gesture, over my head and onto the asphalt driveway behind me, where it made a really loud noise.

That day, deep in a land of great beauty first inhabited by the Chippewa, I earned my first proud native American name, just like Kevin Costner in “Dances With Wolves.” It was a name Jake and the other guides whispered in an almost magical way every time I walked past their cabin that night. I’m pretty sure Wudadummshitt means “Strong as Buffalo.”