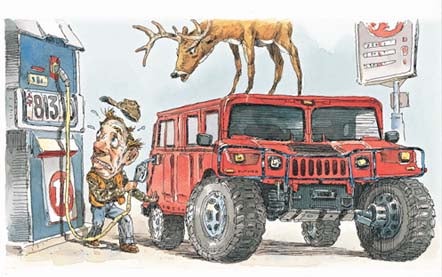 It’s time to say good-bye to a dear and trusted friend. He looks awful and smells even worse. Frankly, the stink has gotten so bad that when I’m around him I feel as if I’m at that famous beans-at-the-campfire scene in Blazing Saddles, which is the funniest, most ridiculous movie in American cinematic history.

I’m talking about my 1989 Chevy Suburban. We’ve piled up more than 275,000 miles together in the past decade, traveling through such exotic places as Montana (“We Have Cows”) and Wyoming (“We Don’t Even Have License Plates”) on countless fishing and hunting trips. The miles accumulated on the big maroon beast at an alarming rate. I knew our time together was coming to an end a year ago when the odometer stopped displaying numbers and instead began flashing the words Get Out! So a few weeks ago I started looking for a new vehicle to take me on my rugged wilderness adventures in pursuit of trophy mule deer, 6×6 elk, and other animals that I have never actually seen.

GOING ALL THE WAY** And now I’m thinking about buying a Hummer. The massive machine-think of it as a **
Ford Expedition that got into Barry Bonds’ medicine cabinet-has everything I want in a truck. This includes a 2,168-pound payload capacity, which would come in extremely handy if I ever take up walrus hunting or come across Ted Kennedy and Michael Moore hitchhiking together.

Of course the $145,497 (depending on options) sticker price on the Hummer H1 wagon caught me a bit off guard, as did the mouthful of hot coffee I blew out of my nose and onto the Hummer salesman.

And there are other problems, too. One is the perception of the Hummer and its owner. Specifically, it’s that a guy who drives a Hummer wasn’t exactly at the front of the line when they were handing out the manhood, if you know what I mean. Now, as he drives by, people point at him and say, “Good Lord, look at the size of that thing!”-erasing those painful high-school memories of being the kid who wouldn’t take a shower after gym class.

A FEW SMALL BUT UNFORTUNATE PROBLEMS
I have additional concerns about owning a Hummer. For example, the brochure says that when you buy a turbo-diesel Hummer H1 you get 440 foot-pounds of torque at 1,800 rpm, a 9,036-pound towing capacity, and a 42-gallon fuel tank. Not listed, however, is another thing you’ll get.

It weighs 8,114 pounds. By way of comparison, a Suburban weighs 5,200 pounds and Kirstie Alley was well under half a ton even before she lost all that weight.

The vehicle is 7 feet 2 inches wide-14 inches wider than a Suburban. This will get you a lot of attention. Especially from the guy standing in front of the Hummer, furiously jumping up and down and waving damp rags over his head as you try to drive through his car wash.

The H1 offers a stunning 16 inches of ground clearance-nearly enough for you to drive over the Hummer monthly payment booklet without scraping the oil pan.

Another problem is the Hummer’s reliability. According to the latest J.D. Power and Associates ratings, Hummer owners gave the vehicle just two out of a possible five stars in “mechanical quality” and “overalll quality.” On a brighter note, the Hummer received the highest five-star rating in “everyone gets the hell out of your way.”

So, despite the concerns and what I imagine will be some scowls from the environmental folks as I run them off the road, I’m getting a Hummer. I take delivery in six months.

It would be sooner, but there’s a wait for the optional panda-fur seats.