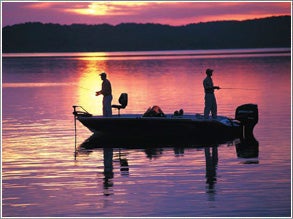 6 Many Midwesterners know western Lake Michigan’s Door Peninsula as a vacation spot with enough parks, golf courses, and resorts to sate the most entertainment-starved family. Many of the region’s anglers also know the Door as “salmonid central” when king salmon, brown trout, and steelhead go on their annual feeding blitz. But the trophy potential is also high for walleyes, pike, and smallmouth bass-the region’s underfished species.

Former tournament angler and guide Dale Stroschein has visited many of the country’s hotspots and will pit his home water against any of them. “Ten-pound-plus walleyes, numerous 5-pound smallmouths, pike that’ll go over 20-and hardly anyone touches the muskies in Green Bay. A couple of years ago, a guy caught one through the ice that was 62 inches. That’s a 50-pound fish.”

This is big water that can intimidate anglers used to more intimate settings. Stroschein’s advice is simple: “Use proven techniques and fish very specific structure. For example, one of our best times for big walleyes is early, even though the water is cold and the fish aren’t aggressive. You troll stickbaits along the contours where you’ve located fish. Keep your motor slow and your bait at the right depth and you have a very good chance to catch a walleye over 10 pounds.”

7 Time your trip right, and boating a season’s worth of muskies in a single day is possible on Lake St. Clair, says Dan Chimelak, owner of Lakeside Fishing Shop. “It’s not unusual for a guide to report a 10-fish day, and some do better. I feel this is the muskie capital of the U.S. There are a lot of fish in the 28- to 42-inch range, and everyone’s looking for those 50-inchers.”

For those not interested in toothy critters, smallmouth bass and perch are likewise abundant.

Sweet Spots: **The waters off Nine Mile Tower and Grosse Pointe Yacht Club
**What’s Hot: Believers
Local Advice: “There’s very little structure, so muskies are always suspended,” Chimelak says. “Their eyes are high on their heads, so you can’t fish them too high, but you can definitely fish them too low.”
Prime Time: June and September through November
More Info: Lakeside Fishing Shop, 586-777-7003; www.lakesidefishingshop.com

8 Joey Jelinek has guided fishermen on this 55,000-acre impoundment for a decade, but says he never saw crappie fishing to match last summer’s. “We started catching 12- to 16-inch fish in April and just kept right at it. When other places were dying in July and August, it was just getting good here.”

When Jelinek’s clients tire of boating slabs, he’ll switch to bass, Truman’s signature species. “We’re known for largemouths, but it’s pretty hard to ignore the hybrids (wipers). You can walk across the shad fry here come summer, and when hybrids start feeding on them, look out. I’ve hhad clients pitch a spoon into that mess and lose all their line to a 32-inch fish.”

Catfish are a final and often overlooked draw. “We’ve got blues, channels, and flatheads,” Jelinek says. “When those shad fry come, the blues will actually pull up on a lake hump and start feeding with the bass.”

Sweet Spots: Arms of Grand and Osage Creeks
What’s Hot: Chartreuse and white tube jigs for crappies
Local Advice: “When it rains and feeder creeks are running full, the catfish want to be in there to see what comes crawling down,” Jelinek says.
Prime Time: April until August for crappies
**More Info: **Joey’s Professional Guide Service, 660-438-4283

9 When a multiyear wet cycle began in the eastern Dakotas in 1993, Devil’s Lake was no puddle at 40,000-some acres. Now it’s more than tripled in size. “That water flooded so much good habitat, the fishing’s going to be excellent for a long time,” says Ted Robinette of Fish Locators Guide Service.

Known by ice fishermen as the yellow perch capital of the world, Devil’s Lake is also known for producing walleyes and northern pike, Robinette says. “Freshwater shrimp fatten up our walleyes in a hurry. I had 58 fish in my boat last summer that were 25 inches or longer. And you won’t get any better pike fishing, even in Canada.”

10 This enormous fish factory covers some 320,000 acres in northern Minnesota, then sprawls into Canada for another 600,000 acres. “The lake kind of splits personalities at the border,” says state large-lake biologist Tom Heinrich. “On our side, it’s walleye and northern pike water. In Ontario, it’s classic Canadian Shield stuff with muskies and smallmouth bass.”

Walleyes are king here. The most popular bite comes during their annual spawning run up the Rainy River. “That fishery is unique because you could catch the walleye of a lifetime, then have to release it,” Heinrich says, noting that special regulations protect all spawning walleyes over 19 inches. Walleye enthusiasts continue to chase their fish after the return to the lake. In the process, they ignore a stellar pike population. “Outside of tip-up fishing in winter, not many people are serious about pike here, and I’ve seen northerns up to 45 inches.”