Trophy deer hotspots are out there-rarely hunted, open to anyone, free of charge. 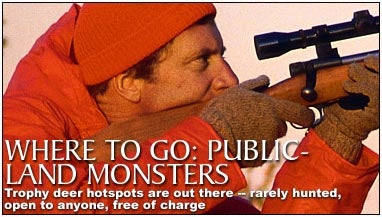 My canoe hisses over the swamp’s wild rice beds for half an hour before I mark the giant white oak and steer into a tiny cove. I unload my bow and gear silently, then sneak 200 yards to an ancient maple where I hang my stand. The rubs and scrapes of a big whitetail are all around me. Twice I’ve seen the buck, his 10-point rack white as porcelain. Maybe today he’ll come within bow range.

I’m hunting public land for a trophy deer, and few people can appreciate that more than me. As a teenager, I started bowhunting on a state wildlife area where shots from duck hunters twice rained down on me, and as many people as deer walked under my stand. But my swamp spot, and many others like it, have convinced me that you can have a quality hunting experience and kill big deer consistently on public land. Finding such spots starts with research. If you’re after trophy deer, look in state record books and the records of the Boone and Crockett Club (www.boone-crockett.org) or the Pope and Young Club (www.pope-young.org) to help narrow down productive regions. To get more specific, call a biologist at a state or federal game agency. Don’t expect him to draw an X on your map and lead you to a deer. Instead, tell him you’re after a quality experience in Public Area Q and you’re willing to work hard to achieve it. Ask specific questions about rut timing, mast crop outlook, cover preferences, unique food sources, logging operations, recent fires. Most biologists eagerly respond to polite, intelligent questions.

After locating a general area, get a topo map (888-839-5551; www.maptech.com) and look for large blocks of roadless timber; if you can drive an ATV to your stand, so can everyone else. That most hunting pressure ends within 1/4 mile of the last parking lot is clichÂ¿Â¿d but true. Go the extra mile and you’ll be closer to a trophy buck than most hunters will ever be.

Wilderness is wonderful, but you can find big bucks near civilized areas if the access is difficult (I hear constant road traffic in my swamp spot, but no other hunters bother to canoe into this hard-to-reach area). On your map, look for wide streams, steep ridges, and other barriers to hunter access. In general, be prepared to scale a mountain, wade a beaver pond, or run a river.

After that, it’s all the usual and essential legwork: scouting, hunting, learning. But the time to start is now. A few weeks of research and phone calls, followed by a weekend scouting trip or two during the off-season, can make this fall the best one you’ve ever had.

Here’s a true story to inspire you: In 2000, three hunters in Minnesota sniffed out a national forest (they’re not saying which one). They studied their maps, called a local biologist, and scouted intensively in the off-season. By 9 a.m. on opening day of rifle season, they’d dropped three bucks, the smallest scoring 161 B&C; points. Any questions?

All the earmarks of a classic Northeastern whitetail hunt are found in the White Mountain National Forest-rugged country, few hunters, and low deer densities. But when you find a whitetail in the Whites, your blood pressure should soar. The buck-to-doe ratio is 1 to 3, and one-third of the bucks are at least 31/2 years old. To find those monsters, search for stands of red oak trees, which typically grow on south- and southwest-facing slopes at about 1,000 feet. Tote a daypack loaded with gear and food, and hunt from dawn until dusk. Still-hunting will allow you to cover more ground to increase your odds.

There are WMAs in the state that have higher whitetail densities (and more hunters), but your chances for a fine Alabama buck are probably higher at the 98,000-acre Black Warrior than at any other state property.

De facto trophy management occurs throughout the state of Ohio: Short, post-rut, shotgun-only seasons ensure a strong mature buck population. This is one reason why southern Ohio’s Wayne National Forest produces trophy bucks every year. The other is that these are rugged and hilly tracts, where roadless areas can be measured in square miles.

Any remote ridge dotted with white oaks can be an excellent place for big deer. Find a recent clear-cut near those oaks, and your chances improve dramatically. Toss in a nearby water source, and you have found a spot that can’t get any better. Pre-rut activity starts in late October, three weeks after the archery opener. Shotgun season starts after Thanksgiving, followed by a December muzzleloader hunt. Contact Ohio Division of Wildlife, Dept. FS, 1840 Belcher Dr., Columbus, OH 43224; 800-945-3543; www.dnr.state.oh.us/wildlife. Wayne National Forest, 740-753-0101; www.fs.fed.us/r9/wayne.

One option is to climb, searching for deer at elevations of 6,000 feet and above. Expect low deer densities, with your best chances during the rut when bucks are covering lots of ground. The other tactic is to hunt near cultivated ranch fields at lower elevations. Frequently there are enough BLM holdings adjacent to private land that it’s possible to ambush deer coming from or going to feed. Contact Idaho Department of Fish and Game, Dept. FS, Box 25, Boise, ID 83707; 208-334-3700; www.state.id.us/fishgame.