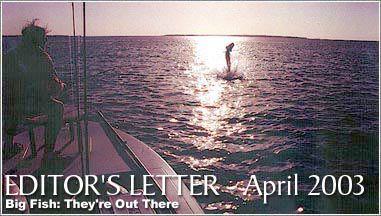 Big fish story: We were cruising along the edge of the Gulf Stream near Bimini, that strange place where the ocean floor drops from 20 feet to about a thousand, in the Miss Bimini II. We’d been trolling for sailfish all morning, but nothing had happened. I was thinking about lunch, the way you always are when important fishing moments are upon you.

Then something big hit the bait, and everyone started shouting. Nobody had seen what it was. Freddy, the mate, popped the rod hard and jammed it into the fighting chair. The 80-pound-test line was coming off the big Penn reel so fast I thought it was going to catch fire. Capt. Bob shouted from the console, “Somebody get in the chair!” There was a long second when we all just stared at each other; then Freddy pointed at me.

At the end of the second hour I thought I might actually die before the fish did. There was a pain in my lower back that had spread up my spine and lodged at the base of my skull. Freddy said the fish was tired, too, but that I had to bring it to the boat. He was standing behind me like a boxing coach. “You got him,” Freddy said. “He’s finished.” And then the fish sounded, taking back 300 yards of line.

Toward the end of the third hour I was cranking better than I had been all day. Maybe it was because Capt. Bob was now yelling, “Reel him, you sorry son of a bitch!” And suddenly the fish popped up onto the surface-a bluefin tuna, sparkling like a giant sapphire. When we got him to the dock, there were about a hundred Bahamians who had shown up to see him. The scale said 685 pounds, and the whole island of Bimini ate tuna that night.

I keep a picture of that fish on my desk. I’ll never catch another one like it-in fact, I’m not sure I’d want to. But it’s good to know they’re out there.