What Would Teddy Do?

A new organization tries to make TR's ideas a reality. 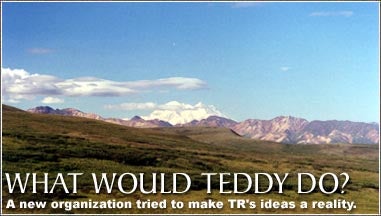 Some hunters and fishermen recently gathered for dinner at the Roosevelt Hotel in New York City to talk about something hunters and fishermen are always talking about: protecting wildlife. The difference this time was that the hunters and fishermen represented about 50 competing magazines, among them In-Fisherman, Petersen’s Hunting, Fly Rod & Reel, Salt Water Sportsman and Outdoor Life (both published by this company), as well as the New York Times. The dinner was organized by an upstart group called the Theodore Roosevelt Conservation Partnership (TRCP), which is based on the 26th president’s radical (at the time) idea that “there can be no greater issue than that of conservation in this country.” The chairman of TRCP, a feisty Tennessean named Jim Range, led a discussion about all the work we’ve got to do, and do now: protecting wetlands; cleaning up rivers; stopping the annihilation of our ocean fisheries; and improving wildlife habitat on millions of acres of public and private land. When someone observed that these issues are not exactly at the top of the agenda in Washington, Range got a little hot and noted that we had 38 million friends who could change that. In other words, it’s up to us.

In that spirit I urge you to read “Drilling the Wild” (page 37), about a matter of increasing urgency to hunters and fishermen: the rapid expansion of oil and gas development on our public lands. As award-winning journalist Ted Kerasote reports, the BLM has released a plan for building “66,000 new coalbed methane wells, 26,000 miles of new roads, and 52,000 miles of new pipelines” in Wyoming’s game-rich Powder River Basin. This is just one of many areas under siege, but it also signals a wide gulf between the Beltway’s priorities and those of America’s outdoorsmen.

So what would Teddy do? If he were walking in the boots of a certain Texan, he might say the same thing he said to Congress in 1907: “We are prone to think of the resources of this country as inexhaustible; this is not so.” Or maybe he would drag all 535 members of Congress out to Wyoming for a big camping trip and show them all the gorgeous land they’re screwing up. In a postÂ¿Â¿Â¿9/11 world, there are a lot of people in Washington who would have you believe that protecting natural resources is a luxury we can’t afford. But even in times like these, TR would have known that wilderness-and lots of it-is the one thing that can keep us all sane.

For more information on TRCP, go to www.trcp.org or call 877-770-8722. DATUS PROPER (1934-2003) On July 27, Field & Stream lost one of its most erudite and gracious voices. Datus Proper, who had written for the magazine since 1985, passed away while fishing Hyalite Creek in Montana. A longtime diplomat with the U.S. Foreign Service, Proper held posts in Angola, Brazil, and Portugal before his retirement. Author of the sporting classics, What the Trout Said and Pheasants of the Mind, he was a devout flyfisherman and upland hunter, and to those of us who knew him, a generous host and a loyal friend. Memorials in his name can be made to the Montana Wilderness Association at P.O. Box 635, Helena, MT 59624. -Keith McCafferty