Two editors take on the Amazon and find fishing that defies typical description. 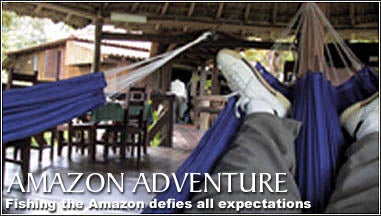 A fish with 4-inch-long fangs-think of a saber-toothed tiger with gills. That’s what I was after, and that’s why I had endured a long flight in a small plane over an endless expanse of Brazilian outback, a flight that was now ending just before sundown. The pilot banked slowly left over a meandering river and then set the plane down on a rough landing strip cut out of a hunk of jungle.

And just where was here? Why, the middle of nowhere, that’s where.

Though the northern watershed of the Amazon River is known primarily for peacock bass and is consequently heavily visited by American headhunters intent on catching big specimens, the southern portion of the river’s drainage system is also a magnificent, if overlooked, fishery. Outsize peacock bass (see the following story) are not on the menu down here, but you will see a greater variety of species, including the spectacular payara?the fish with fangs. In fact, every fish in the river has teeth. Lip holds are out.

I fished out of Rancho Mata Verde (“Green Forest Ranch”) in the sparsely settled Mato Grosso (“Large Forest”) last April with Don Logan and lodge owner Genesio Crispin. Genesio is an engaging host and a terrific guide, who quickly put us onto fish.

“You are too early for prime time,” he told me. “The river’s still high from the wet season. Most of the fish, especially the peacocks, will be holding back out of reach in the flooded timber, but we’ll still do fine as long as you can cast tight to cover.”

That was no problem for Don, an experienced bass fisherman from Alabama. His first cast demonstrated his mastery of fishing to shoreline cover. Naturally, we got hung up a lot. Each time we did, we apologized to Genesio, who insisted on bulling the 18-foot skiff (equipped with an outboard and an electric trolling motor) into shoreline cover to retrieve the lure.

“No problem,” he said. “If you’re not hanging up, you’re not casting close enough. The biggest problem I see with Americans who fish here is that they can’t cast accurately to cover.”

Genesio smiled and shrugged his shoulders. “We troll.”

An added challenge for us was the fast current in some sections of the river. At one point, as we drifted past the mouth of a small tributary, Genesio said, “Cast back up in there and reel in fast.”

I did as directed and was greeted by a monster strike.

Try as I might, I couldn’t turn the fish, which tore down through a parallel, tree-choked channel as we floated rapidly past. Genesio fired up the 15-horse kicker, drove us straight into the brush, and helped me thread the rod through the trees. Once clear, we faced another hurdle; the fish had swum beyond a submerged log. I could still feel a pulse on the line, so Genesio bent over and passed the rod under the log. Then Don spotted the fish, a nice payara, holding about 10 feet below the skiff. Although it looked winded, the fish still had plenty of fight, plus those big, nasty teeth. (That’s why you let the guide handle the fish, in this case with a Boga Grip.)

Not long after that, Don caught another, bigger, payara that probably weighed around 20 pounds. Later we complemented the payara with a virtual cornucopia of Brazilian gamefish: a big piranha, a couple of small peacock bass, pacu (sort of an outsize bream), bicuda (similar to northern pike), a catfish (which jumped at the strike!), and the matrinxa, which looks like a shad and leaps like a rainbow.

I had come equipped with a wide variety of artificial lures, including 7-inch topwater plugs. Given the high water, however, the fish preferred smaller offerings, such as 5-inch floating-diving minnows and that largemouth bass standby, the Rat-L-Trap. Some of the hookups were right under low-hanging limbs and in tight shoreline pockets; others occurred at the boat. Those strikes, where the massive head of a payara would suddenly materialize like a ghost just inches from your fingers, were heart-stoppers. Don and I both used baitcasting tackle and 20-pound-test line. Part of the fun was we didn’t know which species would strike next; no matter, they all hit like freight trains, and stout tackle is required.

Rio Liberdado (also known as Rio Fontoura) is located in northern Mato Grosso near the border with Para. It flows into the Rio Xingu, which ultimately joins the Amazon near its mouth. Even during the rainy season, the river runs clear because the surrounding forest has not been logged. Getting to the lodge takes a three-hour charter flight from Brasilia in a small plane. The lodge is comfortable, if a bit rustic (no air-conditioning), features authentic Brazilian fare (it helps if you like cilantro), and is a good bet for adventurous anglers who want to plunge deep into the Brazilian jungle.

Late one afternoon, as we drifted slowly through a lazy section of the river, I heard the distinct tones of a classic wolf whistle. I asked Genesio what it was.

“It’s a bird we call the steelbreast,” he replied. “In Portuguese, the name is biscateiro, which translates into ‘wolf man.’ You know, a man who chases women.”

A few minutes later, a pair of golden-colored parrots, looking like refugees from The Wizard of Oz, drifted overhead, and on the far bank a family of howler monkeys began growling, sounding like a pride of lions.

“You don’t hear this in the states,” I said to Genesio.

“No,” he said, as he turned the skiff into the current. “This is a different place.”

For more on the Amazon readThe Northern Amazon: Pleasures of the Peacock by Ken Schultz