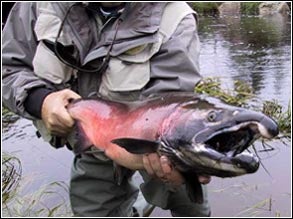 Dealing With Crowds
Some rivers receive a lot of traffic, but many others are lightly fished. Expect to have a lot of company on the weekends. But remember, you have a mobile camp. If the creek you want to fish is too crowded, pick up and go. And, if you’re willing to walk past the crowded spots–sometimes no more than a couple of hundred yards–you’ll often find uncrowded fishing.

“Michigan Rig”
Peter handed me a 9-1/2-foot 9-weight fly rod. I asked about patterns. “We’ll get to that, but first I want to rig this rod so you will catch fish.” He pulled out two spools of monofilament line and a small snap swivel.

“What the hell are you doing?” I asked.

“Trust me, pal. It’s a nasty looking thing, but you will catch fish when no one else is getting a bite. We’re using a ‘Michigan Rig.'”

The “Michigan Rig” is widely used in that state by steelheaders and salmon chasers. Some anglers use the rig in the Pacific Northwest as well, and it is slowly gaining favor in Alaska.

Here’s how you rig it: Start with a floating level shooting line attached to a 5-foot section of 15-pound monofilament line. Tie on a small snap swivel, and run a short dropper to hold split shot. Then tie on a 4-foot section of 10-pound mono. The first fly is an egg pattern. Color isn’t critical, but it should be very visible. (We used orange and fluorescent green.) Finally, tie a nymph below the egg with 10-pound mono. We used a looped clinch over the bend of the hook. “It’s easy to tie, and damn near impossible to screw up,” Peter said. “The idea is to get the flies to the bottom where the fish are. If the patterns aren’t at eye level, you won’t catch fish.”

The rig is particularly effective when sight fishing, but it will also produce well when you’re fishing blind.

It’s also a dream to cast, as I found out when we walked down the trail to Montana Creek.

Montana Creek
A simple roll cast put the rig in the river. The key to catching fish is getting the proper drift.

“You want to avoid fishing directly downstream to the fish,” Peter said. “A salmon will rarely chase food, so the fly has to drift past the fish. Cast above at a 45-degree angle to the fish, approximately 20 to 30 feet away. Adjust the cast and drift until you know the fly is passing by close to its mouth. You must get the fly within 4 inches of the fish.

“You must feel the line on the bottom; you should it going tap-tap-tap. If you don’t, you’re not down deep enough. Add more weight.

“If you’re tapping the bottom while the fly passes the nose of the fish, and if you don’t spook him, you’ll probably hook him. When the line stops or hesitates, set the hook.”

This is an acquired skill. It’s not hard, but it is different. Most important, it is effective. The fish are deeper than they appear to be, and if the fly is not at their eye level, you won’t catch them. Typically, the fish we caught would hit the nymph, but a couple took the egg pattern. The egg also serves as an indicator to make sure you are at the proper depth.

First Fish
We rigged up, walked down the bank, and stepped into the stream. Immediately we were into pinks. Not long after I had my first silver on. When I landed it, Peter said, “Oh, he was good to you. He’s small, no more than 6 pounds, and didn’t rough you up. This is a gift from the State of Alaska.

Peter laughed. “See what I mean? That would have gone 16 pounds easy.”

“Well, there was no way I could have controlled him,” I saaid.

“No, in the tight quarters of this stretch, you were a goner. But now you know what I’m talking about. They’re awesome fish.”

We finished the evening taking more pinks, sleek hens and humpbacked males. Then we retired to the comfort of the camper, made a hot dinner, and called it a night.

The next morning, it was cloudy with periods of light rain. Several locals were fishing our stretch, so we walked down 1/4 mile to a bend in the river with a large gravel bar on our side. Across from us were two anglers, one fishing with flies, the other with spinners.

Peter walked along the bar spotting fish. “There’s a chum. See? Two pinks there. Oh, man, look. A pair of silvers. This is the place!”

We started casting and immediately were into fish. Peter took a nice silver, then a chum. I had a couple of pinks and a hooked up on a chum that broke me off on a terrific run.

Then I moved down to sight-cast to a silver holding in the gravel.

When I finally got the correct drift the fish struck. He tore downstream, and in a matter of seconds had peeled off 90 feet of line. I was into the backing before I could start to recover line.

Slowly I worked him back, trying to keep him above the riffle and out of stronger current. A few minutes the 10-pounder came to hand.

When Peter and I looked around, we were the only anglers taking fish. The pair across from us hadn’t had a bite, nor had the trio upstream from us.

“When the fish are stacked in these runs like cordwood,” Peter said, “anyone can catch them, using anything. But when they’re spaced out like they are today, this Michigan rig is the only way you’ll get them.”

(The following day, conditions had changed. The guy across from us nailed fish after fish on egg patterns and spoons because the fish had stacked up in an eddy on his side. We still caught fish by concentrating on a drop-off, but the main action had clearly shifted to the other side of the stream.)

Go to Part 3 of the Alaska Journal