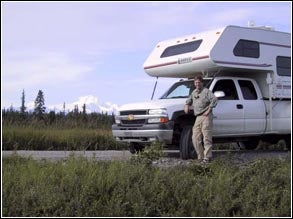 Fish Fighting Tip
Big chums and silvers will tear up light tackle and reels with cheap drags. You can’t afford to bring a knife to this gun fight. Invest in quality tackle that can take the heat. As you gain experience fighting fish, and know the limits of your tackle, you can fight the fish more aggressively. That helps keep them closer to you, which increases the odds of landing a big one. If you let a big fish get downstream of you in fact current, it’s a lost cause. You want to let a bruiser know you’re the boss, and a powerful rod, a reel with a drag that won’t stutter, and good tippet material can help you do that.

When you fish in Alaska, you need to prepare for rain. We endured four straight days of it. We lost a couple of streams to high water, but by being so mobile we were able to move around enough to find streams in fishable conditions. More important, our “camp” was dry. At the and of a soggy day, we could strip out of wet waders, hang them from the side of the camper, get into dry clothing, and sit under the awning and look out on a creek. A hot meal and a dry bed were great tonics as well.

Oddly enough, considering how important weather is to this state, we had trouble getting accurate forecasts. Most natives, when asked about rain, would shrug their shoulders and say, “it’ll stop when it stops.”

We lost Peter Creek to high water, so we stopped at The Roadhouse, a bar (with food and lodging), on Petersville Road. It was built in 1931 and originally catered to miners. Becky Scott, a transplant from Reno, has taken the place over from her mother (her grandparents were the original owners). While we ate cheeseburgers (chips, no fries) at the bar, Peter asked her if she had heard a recent weather forecast.

“No,” she said, “but let’s check The Weather Channel.” She clicked on the TV and we turned eagerly to the screen. Big problem: the cable feed came from Los Angeles; there was no mention of Alaska.

“All I can tell you,” she said, “is that it will rain until it stops.”

Rain Gear
Rain gear is a critical equipment choice. You’ll need an excellent rain jacket, with breathable membranes. A good wide-brimmed rain hat is also a must. You may look like a geek, but you’ll be dry when others are wet.

Light thermal underwear, wool/poly socks, and a sweater or pile vest complete the basic package. You’ll wear them in combination depending on temperature and dampness. And trust me, there’ll be at least one day when you’ll wear it all. A real advantage of RV camping is you can afford to lug a little extra stuff.

Moose Creek
Funny thing: we never saw a moose at Moose Creek. As we crossed the bridge, Peter stopped the RV and got out to see if the river held salmon. The water was high and tea-colored, but he could see silvers stacked up at the edge of the bridge. A spin fishermen saw us looking at the water and instantly knew we were looking at fish.

Later, we walked down the bank headed for a bend in the river said to hold nice rainbows and grayling. As we passed two anglers casting from the bank, one said, “You got a gun?”

The guy looked at me.

“Well, stay close to him,” he said, pointing at Peter. “We fished down there and heard a noise. Can’t say it was a bear. But since we didn’t have a gun, we backed out.”

Shortly thereafter, as we were working our way through the thick stuff, we heard a shot.

I went into hypperdrive. The vegetation was so thick that if we did encounter a bear it was going to be face to face. Peter turned around, smiled, and said, “This trail was cut by an angler, but instead of hands and feet he’s got big paws.”

I smiled. “That’s fascinating. Let’s get the hell out of here.”

** Bear Facts**
Bears are a fact of life in Alaska. You need to take them seriously, but not let them rule your life. Basic precautions include giving them plenty of room and not surprising them. When you walk in thick cover, sing, talk, or otherwise make lots of noise. Almost always, a bear will hear you and go to great lengths to avoid you.

Should you bring a gun? This is a much-debated question, but every experienced angler we encountered on the more remote stretches we fished had either a .44 magnum handgun or a shotgun. Many experts recommend bear spray rather than a firearm. The problem with bear spray is that to be effective it needs to be discharged at a distance of 10 feet or less. If the wind is in the bear’s favor, you run the very real possibility of the spray blowing back on you.

Bottom line: Grizzly charges are almost always a bluff. Stand your ground and yell. Do not run. To a bear, food runs. Running may provoke an attack that was never intended.

When Peter and I encountered a pair of bears while fishing a gravel bar on Clear Creek, we noted their progress and continued to fish. It was obvious the bears weren’t interested in us. They came to fish.

Once they had scooped up some salmon from a side channel, they left.

Go to Part 4 of the Alaska Journal