Deck chairs on the Titanic 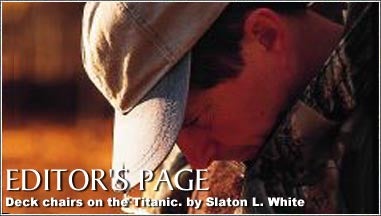 “Storm Warnings, Part 2,” which you’ll find on page 68, is the conclusion to Field & Stream’s yearlong investigation into the financial crisis that has long besieged state fish and game agencies. It’s an ugly picture; once the envy of the world for their funding and accomplishments, American game and fish agencies are tottering toward bankruptcy.

What is being done? Sadly, very little. The measures most states are employing to stave off total disaster amount to little more than rearranging the deck chairs on the Titanic.

What is needed are solid plans to put these agencies back on firm financial footing. This month, Field & Stream looks at a pair of states-Missouri and Arkansas-that have done just that, as well as a federal proposal known as the Conservation and Reinvestment Act (CARA). The Missouri model, which Arkansas recently adopted, works because it employs a statewide tax that everyone-not just hunters and fishermen-pays. It is a system that shares the load because, ultimately, everyone benefits from healthy and properly managed fish and game populations. If, as recent studies (like the one prepared by Roper Starch for the Recreation Roundtable) seem to show, most Americans believe access to open space, fish, and wildlife is a major consideration in measuring quality of life, then more Americans should pay for it.

That proposition, however, does open a can of worms. Once so-called nonconsumptive groups (hikers, bird-watchers, backpackers, etc.) start paying their way, there will be inevitable pressure to control how the money will be used. This isn’t a big deal in states with long-standing and popular support for hunting and fishing. But it will be an issue in states where that support has eroded. Though the editors of Field & Stream believe nonconsumptive users of the outdoors should contribute to fish and wildlife management, we don’t believe that people who refuse to recognize the value of hunting and fishing (both as recreation and legitimate management tools) should serve in any capacity on wildlife or fish management councils or advisory boards.

As states look for new funding mechanisms, it’s important for sportsmen to continue their financial support. “We need to keep the dollars flowing to wildlife now more than ever,” says Doug Jeanneret, director of communications for the U.S. Sportsmen’s Alliance. “If nonsportsmen’s dollars ever exceed pure sportsmen’s funding, we’ll cease to be relevant as will the sports of hunting and fishing.” Finally, the nation needs to wake up to one incontrovertible fact: Outdoor recreation is big business, one that pumps billions of dollars into our national economy. It’s time the states and federal government treated it as such, and started investing in it.