You may have noticed. 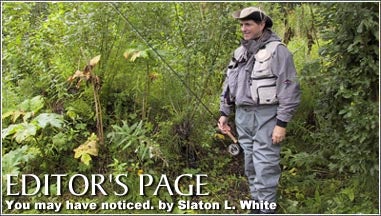 It was a dark and stormy night. I was flying across Lake Michigan to catch the salmon run in the Pere Marquette River when the cabin lit up with a flash. Obviously, the plane had been struck by lightning. A few uneasy moments passed before we heard the reassuring tones of the pilot’s voice on the p.a. system. “You may have noticed that we were struck by lightning.” Was he kidding? You bet we noticed.

Well, you may have noticed a few changes in the magazine over the past couple of months. We’ve been tinkering with the look of Field & Stream-all part of a plan to make the magazine better. Last month, you saw a much larger feature section as well as the elimination of our regional editorial sections. Both changes were based on careful study of our regular subscriber surveys.

Most important, over the next few issues, you’ll start seeing longer stories. Our surveys showed we were giving readers enough how-to information, but we weren’t giving them the kind of reading experience many craved.

For example, one longtime subscriber who took the trouble to write me said, “I’ve been hunting for 30 years. I know how to kill a deer. But you never take me anywhere anymore. I want to go along on a hunt. I want my lungs to burn at 9,000 feet, I want my knees to buckle under the weight of a heavy pack.” Well, sir, we heard you.

This month, you’ll see a new graphic look and a repositioning of our regular departments. In the past, popular departments such as Fishing and Shooting were placed in the back of the magazine. Now you’ll find them up front, where they’ll be more accessible. You’ll also notice we’ve doubled our shooting coverage; now David E. Petzal (Rifles) and Philip Bourjaily (Shotguns) will appear every month. Again, this change was driven by our subscriber surveys.