When Nothing is Something 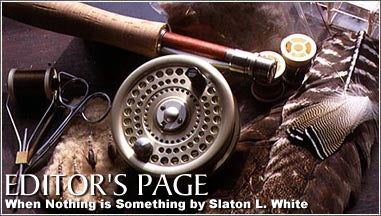 The first time I fished for trout with editor-at-large John Merwin was on the fabled Delaware River that runs between Pennsylvania and New York. I was a young man in a hurry, one who thought flyfishing for trout meant marathon bouts of casting. I whipped up quite a froth-so much so that John came over and said, after looking at a horrendous tangle in my leader, “This will never do.”

Thus began my education in what it takes to really become a complete trout fisherman. As befits the man who was the founding editor of_ Fly Rod & Reel_, John offered superb advice regarding the technical deficiencies in my casting. The next day he gave me what I now regard to be the single most important lesson in trout fishing I’ve ever received.

Late in the afternoon we walked to a long pool on the river’s West Branch. John, a man who chooses his words carefully, said, “You stay here. Don’t move. I’ll be upstream about 100 yards.” He looked at his watch. “It’s three. Sunset is around eight. You won’t start seeing rises until after dusk, and the fishing won’t really start until almost dark. See you later.” And he walked off.

For a guy accustomed to doing something (however ineffective), doing nothing was pure torture. But then I started watching John. He stood motionless, staring into the upper reaches of the pool. He sat quietly and watched birds flit along the bankside cover. I thought, This is like deer hunting. That’s when it hit me. Though I wasn’t casting, I was fishing. John was teaching me to fish like a heron, staking out the ground, lying in wait like a predator, learning how to use patience as an ally.

At last light, when I lost a big rainbow as a full moon rose over the valley, I heard his voice directly behind me. “That was a nice fish.” I hadn’t even heard him wade up to me.

You can take advantage of John’s teaching prowess every month by turning to Tackle & Tactics. Though his subject this month is the ubiquitous fly of autumn, the bluewing olive (see page 64), John is the complete package. Baitcasting, spinning, flyfishing, trout, bass, pikeÂ¿Â¿Â¿. You name it, he’s done it. And he’s ready to pass that hard-won knowledge on to you.