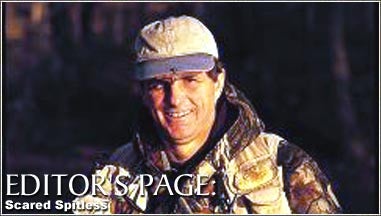 Reading the report on chronic wasting disease by Hal Herring (see page 106 for the second installment of “Dead Deer Walking”) is an experience akin to staring a hooded cobra eye to eye. It flat out scared me spitless. Is this the end of big-game hunting as we know it?

No. “The appearance of chronic wasting disease in wild mule deer, whitetails, and elk does not spell doom for North American big-game hunting,” Herring told me when I called him to talk about his report. “Although it is easy to see CWD as a kind of Andromeda Strain, with no natural controls, it probably is not.”

But that doesn’t mean the impact of CWD will be short-lived, especially when discussion of it triggers responses once reserved for Ebola or AIDS. Another troubling aspect is how we’re dealing with the spread of CWD, particularly the radical eradication programs being undertaken in Wisconsin and Colorado.

“Killing so much public wildlife makes me sick,” Herring says, “but I believe that the wildlife managers and biologists and researchers are sincere in their belief that all this killing might serve to slow or stop the disease’s spread. However, hunters must watch this closely, and they must demand that the efforts produce some results-or at least the hope of slowing or stopping the disease. Simply slaughtering our wild game animals is not an acceptable long-term disease management strategy.”

Herring reserves his rage for something else-game farms. To him, this industry is the primary agent responsible for cultivating and spreading CWD. Fact is, the game-farm industry is at odds with the management and conservation of American wildlife and wild big-game animals. “They have placed in danger the public wildlife resources that we all depend on for traditional hunting,” he says, “and now we’re paying the price.”

I know a couple of hunters who have no intention of hunting deer this year. That may be the worst development of all. As Herring says, “The absolute worst thing I can imagine is for outdoorsmen to abandon hunting. Hunting is the most profound relationship that human beings can have with the natural world, and we need those connections now more than ever.”