He's in the Aim Game 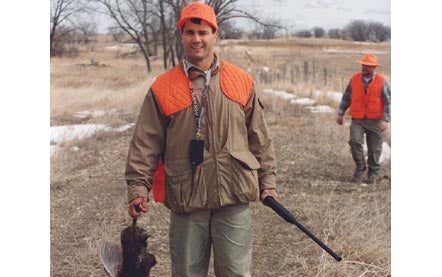 Adam Vinatieri is the first NFL kicker since 1971 to nail a winning field goal in the Super Bowl’s final minute. In fact, he’s done it twice for the New England Patriots. But his aim is just as important to him off the playing field: Born and raised in South Dakota, Vinatieri comes from a family steeped in the American hunting tradition.

“As soon as I was able to walk and handle the cold, I was out there hunting with my dad,” he says. “Besides football and my family, hunting and the outdoors are my No. 1 passion.”

Vinatieri’s on-field success during his nine-year career has allowed him to pursue his in-the-field passion in the off-season. “Two years ago I went to Africa and did a big plains animal hunt with my dad and my brother. Now we’re planning to do a spring bear hunt up in Alaska.” But no matter how far afield he goes, the birds always lure him back home. “The pheasant hunting in South Dakota is simply the best.”

** Hotspots **
I do most of my hunting down in the Yankton-Utica area in the southeastern part of South Dakota near my grandfather’s farm. There is a lot of good hunting across the state, but a lot of places are being bought up, and people are bringing in the pen-raised birds and doing corporate hunts. Although there are some public lands still left, it seems they are getting harder and harder to find. After football is over, I usually hunt on private farms like the Warne Ranch in Pierre [BRACKET “605-224-1445”] or the E Circle E Lodge in Meckling [BRACKET “605-624-2800”] because they are open after the regular season ends.

** What I Shoot **
My dad gave me my first gun, a side-by-side Italian 12-gauge my great-great-grandfather brought over from Italy. Using that gun is a family tradition. It’s been passed on from my older brother to me and then to my younger brother. When you’re 12 you want a brand-new gun, but we all had to start with the family gun and work our way up. Now I shoot my Benelli Super Black Eagle 12-gauge for upland game. An autoloader is the way to go out there because if 10 birds flush, which can happen, and you’re carrying an over/under, you’re always going to wish you had another shot.

** When to Go **
Every year is a little different. Obviously opening weekend is great because everyone takes part. I remember going on opening day with my dad, my brother, cousins, nieces, nephews-you name it. It’s a lot of fun to have everyone together, and the hunting can be really good if most of the crops are harvested. But if it’s a late farming season-there’s been a lot of moisture and the crops are still in-it’s better to wait. When the corn is still in the ground it’s hard to get to the birds because they can hide in so many places.

** Local Chow **
There is an all-you-can-eat, mom-and-pop place called JoDean’s [BRACKET “Highway 81 in Yankton, 605-665-9884”], that’s loaded with hunters. It’s not a fancy place-they’re famous for their huge buffets. It’s just regular old American-warm and a lot of it. Also, my mom does a real good job with a pheasant, mushroom, and rice casserole. She has a few different pheasant recipes that have been passed down from generation to generation, so at the end of a day, after we’ve put in 10 miles chasing birds, we go home and eat until we bust.