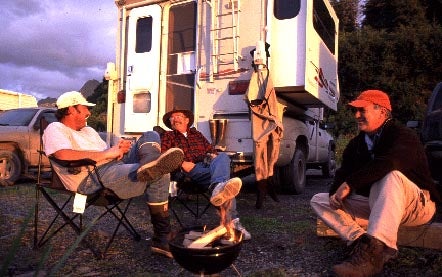 Car camping celebrates the best of opposite ends of the American spectrum-a little bit of Yellowstone, a little bit of Route 66. It’s a fine way to find yourself in fish country. Setting up a campground base camp often means a short drive or hike to the trailheads that lead to the best trout water, putting you there at first light. At many lakes, rivers, and reservoirs, you can camp waterside and anchor your boat just offshore, making a last-minute run to bass cover as simple as cranking the motor. And having an available vehicle makes it possible to restock the potato chip stash with ease. Trouble is, one man’s notion of car camping is another’s AC compressorÂ¿Â¿Â¿riddled nightmare. The tricked-out Winnebago

that spawns dreams of the open road for some gives tent campers nightmares. You need to tailor your gear and choice of destinations to take advantage of the strengths of whatever technology level you desire, without impairing someone else’s ability to enjoy the wilds. Done well, with enough good-neighborliness and the requisite aluminum lawn chair with the rotting green webbing, car camping is as fine a way of nudging into wild fish country as there is.

Packing Up
Organization wins the day. Buy three large plastic storage bins for the garage or basement and designate them for camping gear. In one, store all sleeping pads, air mattresses, pumps, sleeping bags, cots, tents, and tarps. In another, pack up stoves, pots and pans, lanterns, hatchets, saws, and other camp tools. Keep the third stocked with items you’ll need for camp and kitchen: a small bag of favorite spices, toilet paper and paper towels, camp soap, spare rope, first-aid kit. Resist the temptation to raid the bins when you’re at home and down to your last paper towel. Now all you have to do is load the bins into the truck, and half your work is done. At camp, the empty containers serve as great dirty laundry hampers and dry storage for firewood until it’s time to pack up and head home.

No matter how you store and pack your gear, load the tent and raincoats last, near the tailgate or on top of the trunk space, where you can retrieve them quickly without burrowing through a mountain of stuff.

The Perfect Site
Managed campgrounds such as state and national parks offer the best and the worst of car camping. You can’t beat the amenities: a hot shower, flush toilets, electrical hookups. And in many regions, regulations prevent backcountry camping. On the flip side, you might be set up next to 18 fraternity boys on an all-night rampage. To avoid user conflicts, shop early in the day for the best selection. Avoid sites close to the bathhouse, where slamming doors will wake you up in the middle of the night, and if you’re tent camping, shun RVs and their incessant generators. To create privacy, back the truck into the parking space and move a picnic table to a 90-degree angle just off the bumper. Drop your tailgate for a large L-shaped kitchen and dining area.

Some of the country’s best car camping is found in national forests, where the rules are more relaxed than in national and state parks. Pullovers along logging roads and gravel paths make for campsites with a sense of the wild. Pass up sites situated on the outside bends in the road-nighttime traffic will sweep headlights across your tent. And toss a large square of indoor-outdoor carpet into the trunk to use as a dirt-stopping tent-door welcome mat.

**Black Hills, South Dakota **
The 71,000-acre Custer State Park is the hub of a little-known trout-fishing mecca, under the watchful gaze of Mount Rushmore. There’s a little bit of everything: tailwaters, freestone streams, and trout-rich lakes and ponds. www.custerstatepark.info

Essential Gear
Coleman RoadTrip Grill It does it all: Choose between interchangeable grill, griddle, and stove-burner surfaces for universal cooking applications. A propane tank provides 20,000 BTUs of meat-searing heat, and the grill fits into a trick stand with collapsible legs and two side tabletops. $170; 800-835-3278; www.coleman.com

Exped Down Air Mattress DLX Fill a 31/2-inch-thick air mattress with high-loft goose down and you wind up with this-a comfy sleeping pad that is warmer than anything else on the market. A pump-sack prevents moisture from clotting the down and doubles as a pillow. $170; 888-609-7187; www.exped.com