O Broder, Where Art Thou?

It's one of the great heads--and pure trouble. 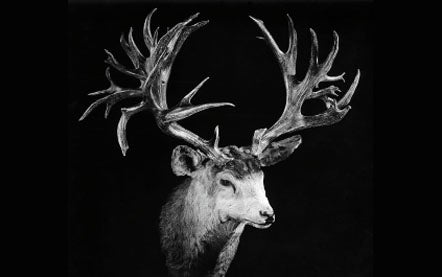 For more than a generation, the elderly children of the late Ed Broder of Edmonton, Alberta, Canada, scrapped shamelessly over the one material possession of great worth that their father had left them-maybe the finest set of mule deer antlers ever taken by a hunter in fair chase. The battle would eventually involve a broken deathbed promise, seven years of bitter familial litigation, false affidavits, clandestine negotiations, a will that was likely forged, possible perjury and obstruction of justice, “contempt of court in spades” according to a presiding judge, a Montana antler collector believed to have secretly purchased the antlers (only to later disavow any knowledge of the transaction), jail time for an old man in a wheelchair, a $40,000 fine, a plea of temporary insanity, and last but most certainly not least, eBay.

Those antlers came from the swamps and sand hills around Chip Lake, about 85 miles due west of Edmonton, Alberta. In November of 1926, an Edmonton farmer, Ed Broder, and his hunting partners loaded provisions and gear into a 1914 Model T and drove until the road gave out at a sawmill camp near the lake. From there they went by hired horse-drawn sleigh to a cabin in the Bigoray River country.

The hunting was all on foot after that and primarily about meat. Broder killed a black bear during the first week. The second brought a foot of fresh tracking snow and the print of a big buck. Broder picked up the track on the afternoon of the 26th and trailed it to where the buck had been bedded. He cut moose tracks but decided to stay on the deer. Miles later, reaching the edge of a clearing, he sighted the buck, rump to him, 200 yards away. Deciding to take it, he brought up his .32 Winchester Special. Broder was simply “shootin’ at some food,” aiming high for the spine, when the buck lifted its head.

What a rack that one’s got, he must have thought as the deer fell to his single bullet.

Indeed. It took Broder some 35 years to have the antlers officially scored, but from the beginning he knew they were exceptional. Mounted, they hung in his house for the rest of his life, drawing no small amount of attention from fellow deer hunters. When he finally had them taped, they proved to have a 385/8-inch outside spread, 43 scorable points, and a final Boone and Crockett Club nontypical tally of 3552/8, making them in absolute terms the largest recorded antlers of any species of deer-mule, whitetail, or blacktail. A score like that, in fact, would have made them one hell of an elk rack.

Broder was skilled at deer hunting but less so at other enterprises. In 1943, according to his son Don, Broder lost his farm and had to haul all his possessions, including the deer head, out to the side of the road. At the time of Broder’s death in 1968 he left an estate amounting to a Model T, a saddle and chaps, a few firearms, some personal effects, and the mounted head universally recognized as the “Broder Buck.”

[NEXT “A QUESTION OF WILL”] A QUESTION OF WILL
What he did not leave, apparently, was a last will and testament. The closest he came seems to have been a vow from Don he extracted as he lay dying, making him promise that the antlers would never pass out of the family. Presumably satisfied that the great trophy was safe, the old deer hunter took his final breath.

It took Broder’s kids exactly three years before they had the head up for sale, offering it in a small ad (with an incorrect score given) in the back pages of Field & Stream. There must not have been any takers because in 1973 the head still hung on the wall of Ed Broder’s old house, until Don arrived one day and carted it away, ostensibly to display it at a sportsmen’s show.

Don kept the head in his house after that, unveiling it at more shows, as well as marketing photos and replicas of it, even hustling T-shirts bearing its image. After nearly a quarter centuryhe other Broders wanted their piece of the head, too, and in 1997 filed a lawsuit to have the trophy sold and the proceeds divvied up among the seven children. Don, to say the least, balked.

He would claim he was only doing his father’s will-or lack of one-by refusing to let the Broder Buck go under the gavel. Nonetheless, his siblings obtained a court order in 2001 prohibiting Don from unilaterally selling or otherwise disposing of the head. In November 2003, he signed a sworn affidavit verifying that the antlers remained securely inside his house. Which made it particularly hard to fathom why the Broder Buck had already managed to show up on eBay the previous April.

One explanation is that the trophy’s appearance on the Internet auction site was a test run to establish its real-world value. The undisclosed reserve price was not met, but the highest bidder reportedly contacted the seller (Don) directly after the auction to make a private offer.

[NEXT “ON THE BLOCK”] ON THE BLOCK
In March 2004 Justice Myra Bielby of the Court of Queen’s Bench in Edmonton ruled that the Broder Buck belonged to all the Broders, and the time had come for Don to cough it up so that it could be auctioned off. Mysteriously, a handwritten will bearing Ed Broder’s signature surfaced just after this. It bequeathed everything Ed had to Don. Nobody believed it, and not even Don was willing to swear, under penalty of perjury, that the signature was his father’s.

The justice’s order threw the inhabitants of Alberta into a tizzy with the prospect of losing such a “provincial treasure”-especially to the United States. One newspaper editorial called for “good old Alberta initiative” to collect enough donations to buy the Broder Buck and keep it north of the border. Only one problem: The Broder Buck’s whereabouts were still a mystery.

By April Don Broder had not only failed to produce the head-he was refusing to reveal its location, invoking his solemn obligation to his late father. And so the justice ruled him in contempt and sent the septuagenarian, who got around on canes and in a wheelchair, rolling into jail.

It took 11 days behind bars to convince Don Broder to come clean. Brought back before the justice, he admitted he had sold the antlers back in May 2003, subsequent to their being offered on eBay. Don Schaufler, a well-known buyer of antlers from Butte, Montana, had paid $170,000 for them.

But Don Broder could not say right off exactly where the sale money was. Then Schaufler asserted that he had no knowledge of the antlers at all (although he was apparently trying to sell them himself). Next, approximately $170,000 materialized in a trust account held by a Calgary lawyer named Guy Lacourciere, who represented Broder. According to the Associated Press:
“Lacourciere said he had been instructed to buy back the antlers and have them transported to the Edmonton office of lawyer Elizabeth MacInnis, who represents Don Broder’s siblings in the lawsuit. If for any reason the antlers couldn’t be purchased, the money would be forwarded to the estate instead.”

Following that, Schaufler offered an additional $55,000 if he could keep the Broder Buck, which was fine with everyone-except, of course, Don Broder.

Although he’d sold it once for $170,000, apparently $225,000 was insufficient now that Don would have to share. A no doubt exasperated Court of Queen’s Bench justice ordered bids for the head to be accepted through July 12, and when no new ones were made, the Montana collector reiterated his offer of an additional $55,000, at which point everyone wearily shook on the deal.

[NEXT “WORTH THE TROUBLE”] ** WORTH THE TROUBLE?**
After nearly a decade’s worth of ugly family strife, what was a one-seventh share of the world-famous deer head worth in cold cash? A total of $32,142.86 per person-not chump change but far from drop-dead money.

Out of everyone, Don Broder fared the worst. Balanced against his share was a fine for court costs of almost $40,000, putting him some $8,000 in the hole. He was sorry about it all, especially for breaking his word to his father, and wanted to mend fences, certain that he “was probably out of [BRACKET “his”] mind at the time,” when all the untruths were told. Nonetheless, he insisted that the court was trying to “steal” the antlers from him, and his lawyer pledged that they would be appealing the fine and the contempt-of-court conviction.

You have to wonder, back through the tracking snow, across the frozen swamp, to the edge of that clearing, to the moment many years before when that mule deer buck lifted his unearthly head, if Ed Broder-were he somehow able to see the kind of children he would have and where that trophy head would lead them-might not have let the hammer down to half cock on the .32 and turned away to look for a forkhorn to shoot instead. p-dead money.

Out of everyone, Don Broder fared the worst. Balanced against his share was a fine for court costs of almost $40,000, putting him some $8,000 in the hole. He was sorry about it all, especially for breaking his word to his father, and wanted to mend fences, certain that he “was probably out of [BRACKET “his”] mind at the time,” when all the untruths were told. Nonetheless, he insisted that the court was trying to “steal” the antlers from him, and his lawyer pledged that they would be appealing the fine and the contempt-of-court conviction.

You have to wonder, back through the tracking snow, across the frozen swamp, to the edge of that clearing, to the moment many years before when that mule deer buck lifted his unearthly head, if Ed Broder-were he somehow able to see the kind of children he would have and where that trophy head would lead them-might not have let the hammer down to half cock on the .32 and turned away to look for a forkhorn to shoot instead.