Wilderness rescue depends on being able to draw attention from much further away than any human voice can carry. Here's how. 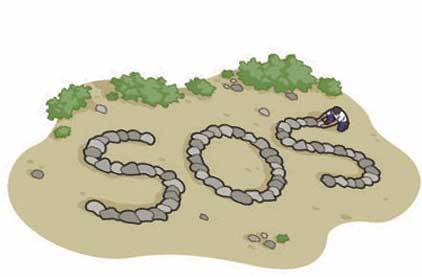 If a hunter lost in the forest cries out for help and no one is close enough to hear, does he still make a sound? This old philosophy question makes the point that wilderness rescue depends upon being able to draw attention from much farther away than any human voice can carry.

Before we get into the key techniques for signaling to land-, air-, and water-based search parties, keep in mind that survival situations are brought about by extraordinary circumstances–blizzards, raging seas, thunderstorms–when conventional methods may not work. It’s not always the strongest who survive. Instead, it’s those who show the ability to improvise, like the plane-crash victims in the Bahamas who used shiny credit cards to flash a passing plane, or the two Montana hunters who were found after rescuers spotted strips of orange marking ribbon they’d tied to bushes. Others have attracted attention by shaking tall trees back and forth. Remember that the farther you stray, the less likely that anyone will hear or see your signals. Follow the No. 1 rule for the lost and injured: Stay put, find an open space, show your face.

FLASH FOR HELP
In clear skies, pilots have spotted flashes from signal mirrors at over 100 miles. Commercially made mirrors, which have sighting holes and grids, make signaling a cinch, although it’s a good idea to carry the directions for your specific model. Improvising a reflective surface takes more practice, but you can signal with a knife blade, reflective tape, a credit card, a can lid, aluminum foil, a space blanket stretched over a green stick bent into a circle, or even a chewing-gum wrapper.

First, hold the object in one hand and point it toward the search plane, holding it close to your face or forehead. Next, stretch your other hand out in front, pointing toward the target, and focus the rays of the sun onto that hand by tilting the reflector. Finally, adjust it so that the reflection bounces just above or through a V in the fingers of your outstretched hand. Do not let your hand block the target.

SEND AN SOS
Three dots, three dashes, three dots is the formal distress signal used in Morse code. Flash it at night with a flashlight, or follow up three short whistle blasts with three longer ones and then three more short ones. You can also spell out the letters SOS on open patches of sand, rock, or snow, using stones, branches, logs, kelp, or other debris that boldly contrasts with the background. Other useful symbols include I, which means you have an injured party; and X, which means you can proceed no farther.

USE THE SIGN OF THREE
Three signals, whether they be gunshots, whistle blasts, or car horns, constitute a universally recognized call of distress. So do three objects arranged in a triangle pattern. Find a clearing on high ground to signal from and adapt techniques as conditions change. For example, during the day, build smudge fires by heaping green branches over the flames. At night, use dry wood for a brighter fire. The pattern of three will attract attention better than a lone fire.

CREATE SHAPES AND ANGLES
Geometric shapes stand out as man-made among nature’s intricate designs. Arrange bright objects such as tarps or ponchos to form a triangle in a clearing near camp. Then, making forays of 1/4 mile or so in each direction (mark your trail so you can backtrack afterward), leave clues that you are in the vicinity by building circles, squares, or triangles out of rocks or logs. Build your signs in the open, and use somethinng that stands out from the background.

POINT THE WAY
The sign for “trail closed,” used to discourage searchers from heading in the wrong direction where two or more trails may converge, is two branches crossed in an X. A single branch laid in the middle of a trail is interpreted as an arrow, with the leafy end showing direction. Secure branches with a stone to assure searchers that they were deliberately placed. These signs are important to leave if circumstances force you to abandon camp. Do anything to help your rescuers.