Starting one without matches takes work, but it's a skill all outdoorsmen should know. Friction and sparks are the keys, but proper technique and choosing the right wood are equally important. Here's how. 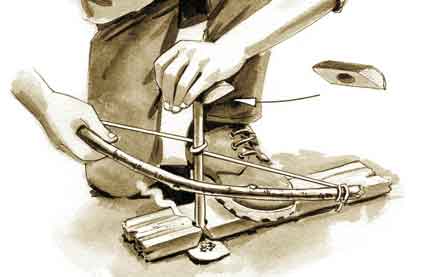 Friction-Based Fire Making
Rubbing two sticks together is likely the oldest of all fire-starting techniques, and also the most difficult. Besides proper technique, you have to choose the right wood for the fireboard and spindle. Sets made from dry softwoods, including aspen, willow, cottonwood, and juniper, are preferred, although a spindle made from a slightly harder wood, combined with a softer fireboard, can also work. The friction of the spindle against an indentation in the fireboard grinds particles from both surfaces, which must heat to 800 degrees F before a glowing coal forms. This must then be transferred to tinder and gently blown to life.

Hand Drill (picture)
Using a hand drill is one of the simplest friction methods, but high speed can be difficult to maintain because only the hands are used to rotate the spindle. It works best in dry climates. Step One Cut a V-shaped notch in the fireboard, then start a small depression adjacent to it with a rock or knife tip. Set a piece of bark underneath the notch to catch the ember. Step Two Place the spindle, which should be 2 feet long, in the depression and, maintaining pressure, roll it between the palms of your hands, running them quickly down the spindle in a burst of speed. Repeat until the spindle tip glows red and an ember is formed. Step Three Tap the fireboard to deposit the ember onto the bark, then transfer it to a tinder bundle (see “Tinder Bundle” on page 56) and blow it to flame.

Two-Man Friction Drill (picture)
Two people can do a better job of maintaining the speed and pressure needed to create an ember using this string variation of a friction drill.

Fire Plough (picture)
This produces its own tinder by pushing out particles of wood ahead of the friction.

Pump Fire Drill (picture)
The Iroquois invented this ingenious pump drill, which uses a flywheel to generate friction. The crossbar and flywheel are made of hardwood; the spindle and fireboard are made from softwoods (as in the hand drill).

Bow Drill (picture)
Of all the friction fire-starting methods, the bow drill is the most efficient at maintaining the speed and pressure needed to produce a coal, and the easiest to master. The combination of the right fireboard and spindle is the key to success, so experiment with different dry softwoods until you find a set that produces. Remember that the drill must be as hard or slightly harder than the fireboard.

Spark-Based Fire Making
Human beings have been starting fires from sparks since the days of the cave dwellers of the Paleolithic era. It is still a vital survival skill for modern hunters and fishermen to learn. If conditions are wet or windy and matches are extremely difficult to light, a glowing spark in tinder uses wind to its advantage to burst into flame.

Flint and Steel (picture)
Striking the softer steel against the harder flint will produce sparks to flame your fire. The curved steel striker provided with flint and steel kits is easiest to use, although with some practice you can produce sparks by using the back of a carbon-steel knife blade. (Stainless-steel knives are usually much too hard to shave sparks from.) An old bastard file or an axe head will also work.