The Discovery Channel's survival expert answers a few of our questions. But he won't tell us the cost of his insurance. 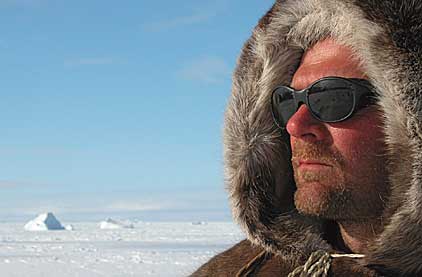 It’s clear that Les Stroud is no stranger to abuse. The concept of his hit show Survivorman on the Science Channel and the Discovery Channel makes sure he gets plenty of it. For each episode, Stroud is dropped off in a different climate (ranging from Canadian Arctic to Georgian swamp) and has to survive alone without supplies for seven days-and film himself the entire time. An Ontario filmmaker and angler who grew up fishing in Muskoka, Stroud now ice fishes for lake trout, pickerel, and bass with his family. We tracked him down between wilderness exiles for a few questions.

F&S;: A lot of people love your show-you make learning survival skills cool. Why?
LS: The thing that maybe scares people off of learning survival skills is a fear of looking like the ultimate Boy Scout, who shows up with all the gadgets. But people shouldn’t think learning survival is corny or overkill. Anything can happen. You just don’t know when the boat’s gonna konk out, and it’s a 70-kilometer walk to the nearest cabin. My film-company business partner was fishing once, went into the bush to use the washroom, got turned around, and was lost for three days.

F&S;: What’s the one item you find yourself wishing you had the most often?
LS: An insulated sleeping pad and a good butane lighter (matches in high altitude).

F&S;: Is there a scenario that you wouldn’t take on?
LS: Anything politically unstable, tsetse-fly areas in Africa, and skydiving.

F&S;: Has there been a point on any of the trips when you felt you were in real danger?
LS: In the Arctic I woke up at one point on a flat rock and thought, “I may have this loaded rifle beside me, but if I wake up and a polar bear is breathing down on my face I don’t stand a chance.” The rescue crew was a great distance away and would not have been able to get to me in time.

F&S;: So what’s your insurance like?
LS: Please don’t remind me.

When we spoke with Les Stroud between tapings of his hit show Survivorman, we couldn’t fit all of his comments into our May 2006 issue. Here’s the balance of that interview:

F&S;: How does hunting fit into your show?
LS: When the show first came out there was a method to my madness as far as what I caught and what I ate. I started off by saying that if you had to survive, you could scrounge for grubs and snails. I wanted to point out that you start small because sometimes that’s all you can get. During that period, I’d get emails from people who were into hunting, saying, Come on, why don’t you kill something, what’s wrong with you? And I’d have to say to them that it ain’t easy to kill something with no knife, no bow, no rifle. It’s not easy even if you’re a skilled hunter to hunt with nothing but your bare hands–it’s brutally hard. Now, I’m getting into bigger animals, so I got a squirrel in Utah, and I took a rabbit in the plane crash episode. (As an aside, the reason I showed snaring rabbits is because it’s so simple. A lot of survival books give you these big elaborate traps, and the average person can’t just pull something like that out of their hat.) Once I started getting these bigger animals, all the anti-hunters emailed saying, Why are you killing a rabbit? And I thought, I just can’t win.

The bottom line is, I show what you could do if you had to survive. End of story. It’s not about hunting, it’s not about tree hugging, it’s about survival. And if a spruce tree is between me and survival, I’m going to take the life of that spruce tree and use it to save mine. If catching a rabbit is between me and survival, I’m going to catch a rabbit. That said, I’m a huge, fanatical nature lover. So it’s not a light thing for me to take the life of that rabbit when I’m quote-unquote just producing a TV show. But maybe somewhere, thhere might be someone in trouble that actually catches a squirrel because they watched my show, and actually makes it through another day and survives, so there is that instructional aspect to it.

F&S;: You don’t seem shy about showing yourself messing up on camera.
LS: Well, it’s like this. The last thing I wanted to present myself as was survival guru guy who knows it all. That’s why I show fumbling and bumbling and failing. It’s real to fail. There’s three ways I approach my filming. Number one is when I show something easy that I know really well, and it comes across like, Man, this guy knows what he’s doing. Number two is when there’s something harder that I know really well, but I don’t show it fast and easy because it may have taken me three months to learn, and I don’t want to mislead the audience into thinking it’s easy. And number three is when there’s something I’m going to attempt–like the battery wires and gasoline fire on the plane crash show–that I’ve never done before. At that point, I’m a regular guy just seeing if he can make this work. I like that because you see a skill tried for the first time, and that is the reality of wilderness survival.

F&S;: Has there been an easiest episode? A hardest episode?
LS: The desert was the easiest. December in the Sonora Desert is actually fairly pleasant. Cold nights, but the days are around 70 degrees F. And there’s lots to eat. The hardest was the arctic. I was caught in between seasons. I asked the Inuit hunter who we consulted for the episode when the hardest time is to survive in the area, and he said right now. It was too warm to make a proper igloo but it was too early for any food to have returned. But in truth my two very hardest experiences were the original pilot versions of Survivorman that I first did, called ‘Stranded’ on Discovery Canada. On the first one there was a freak heat wave and all the mosquitoes came back out with a vengeance. They brutalized me for days with no screening, repellant, or place to hide. I almost quit. For the second show it was minus-40 every night in 5 feet of snow. Need I say more?

F&S;: What’s the one biggest mistake you see people making in the wild?
LS: Lack of preparation. But once they’re out there, trying to rush.

F&S;: Do you have any fishing trips coming up?
LS: I was out ice fishing with my kids just the other week. We have a cottage in Ontario which is in an area with beautiful rocks, trees, lakes, water–just a wonderful wild place. So we’re always up there ice fishing, going after whitefish and stuff. I’ll be fishing again soon.

Catch Survivorman on the Science Channel Fridays at 10 p.m. EST/PT. For airtimes on the Discovery Channel, check your local listings.