When General Motors filed for bankruptcy in the dark days of 2009, the only light at the end of tunnel... 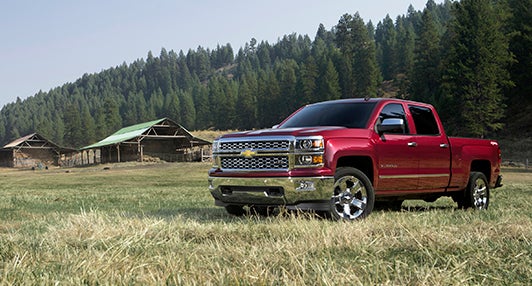 That’s because the truck market is incredibly competitive these days. You just can’t come out with a new model every ten years or so and assume full-size truck buyers–the last really brand-loyal folks out there–will wait to see what you’ve done.

Fortunately for hunters and fisherman, the new Silverado is all truck–and then some. I got a sneak peak at the 2014 Crew Cabs a couple of days ago. With its big square front end and dual stacked headlamps, it still looks like a Chevy, though it’s a bit more aerodynamic without going all curvy on you. But the real news for outdoorsmen is what’s been done in three key areas: powertrain, the bed, and the interior.

Powertrain
The EcoTec3 lineup for the 2014 Silverado includes a 4.3-liter V6 (285 hp/305 lb.-ft. of torque) and a 5.3-liter V8 (355 hp/383 lb.-ft. of torque), both mated to a six-speed automatic transmission. (A 6.2-liter V8 will be available later in the year.) GM claims the powertrains will deliver exceptional fuel economy, but can’t supply exact figures until EPA certification is completed later this year. Based on the instant economy readings I could see on the instrument panel, I think they’ll deliver very good numbers. This is especially good news for outdoorsmen who tow or tend to load the bed with hunting, fishing, and camping gear.

Sheryl Balsley, assistant chief engineer of small block engines, told me, “Our new family of engines offer EcoTech technology, active fuel management, direct-injection fuel management, and variable valve timing. We use these technologies to improve the efficiency and the performance of the truck. You’ve now got a broader, flatter torque curve that allows us to run in the four-cylinder mode (both for the V6 and V8) when you don’t need that extra performance. And we now can now maintain four-cylinder operation for a much longer time.”

It does all this seamlessly. Other than an icon on the instrument panel showing which mode the engine is in, you won’t detect a thing.

I drove both the 4.3-liter V6 and the 5.3-liter V8. Even while towing a trailer with the V6, I had plenty of power. At one point I looked at the icon and saw the engine was using only four cylinders. The V8 engine will boast a tow rate rating of 11,500 pounds, giving it the edge over both Ford and Ram.

The Bed and Tailgate
When you move to the tailgate, there’s a nice surprise waiting.

Jeff Luke, executive chief engineer (and, by the way, a guy who hunts and fishes), said, “One of our objects was to make the truck better, obviously, but also make it easier to use. When we focused on the bed, we looked specifically at the tailgate to make it easier to open and close.”

Here’s what they’ve done. The tailgate now employs a special damper that gradually lowers it. When you come back to the truck after a long day afield, simply pull on the handle and let it go; the tailgate eases down on its own. The tailgate is also lighter (as are several other major components on the truck–all part of an effort to improve fuel economy), so it’s far easier to lift to close.

The bed has optional rail lights, a great feature if you, like many outdoorsmen, install a cap or tonneau cover to secure gear. Though pickups have for many years featured a rear cab light to illuminate the bed, it’s of little use if you install a cap or cover. Now, you’ll have LED lights under the side rails.

“We think this is far better than holding a flashlight in your mouth while you’re trying to find your pack in the dark,” Luke says. I agree.

The new truck also incorporates corner steps in the steel bumper (yes, an honest-to-God metal bumper!) and integrated handholds in the side rails that first debuted on the Avalanche years ago. Now, when you need to hoist a deer into the bed, your buddy can quickly hop up to help.

GM also provides two bed protection solutions. You can order the truck with a plastic drop-in bedliner or a spray-on liner.

Quiet, Please
When I drove the new truck I was surprised at how quiet the interior was. Luke told me that was by design. One of the keys to achieving better aerodynamics (vital for enhanced fuel economy) is not only controlling airflow over the top of the vehicle, but controlling it underneath as well.

“When you look at the front face of the truck, which is a very bold Chevrolet look, at the very bottom of the bumper you’ll see an air dam that helps manage airflow underneath the truck. The design of this dam took its cues from the 2014 Corvette.”

The other benefit of this controlled airflow is reduced wind and road noise. GM even tucked the windshield wipers further down into the aluminum hood in an effort to reduce noise. Improved door seals, sound dampening elements in the body, and engine and suspension mounts all help lower the volume inside. At times, I felt as if I were driving in a cocoon.

The Crew Cabs should be showing up in dealer showrooms in the next couple of weeks. You owe it to yourself to take a look at what the new GM has wrought.