Opening day commonly finds turkeys still hanging out in mixed-sex flocks that roost, feed, and travel together. And while a... 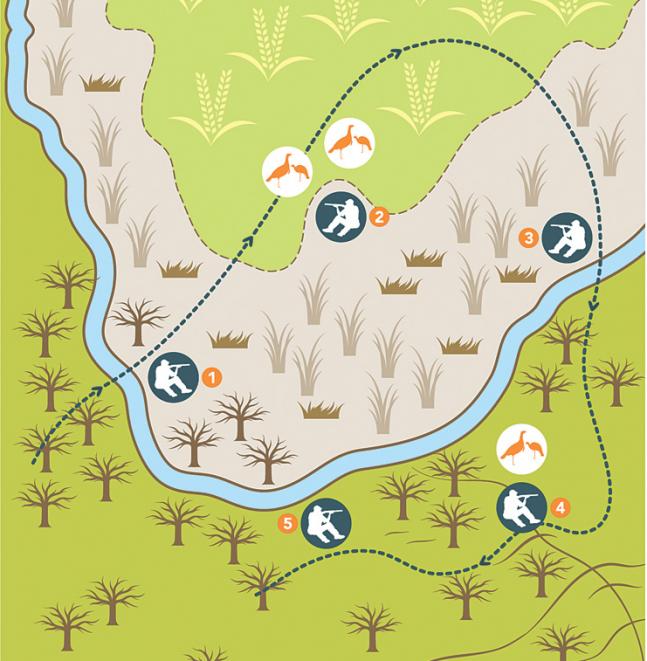 Opening day commonly finds turkeys still hanging out in mixed-sex flocks that roost, feed, and travel together. And while a whole bunch of birds may seem like a blessing, the fact remains that killing one tom usually requires fooling the whole flock. The upside is that grouped-up turkeys have predictable routines, and with a little preseason scouting to learn their daily movements, you can stay one step ahead of them all day long and eventually ambush a gregarious gobbler. Here is your dawn-to-dusk planner.

1. Dawn
Early-spring flocks sleep in the same areas–if not the exact same trees–quite regularly, giving you ample opportunity to learn their roosting patterns, including which direction they move in after fly-down. Put them to bed the evening before your hunt. Then return well before dawn and set up on the side of the roost that puts you in their typical lane of travel. Your odds of getting a tom within gun range will skyrocket.

2. Early Morning
Hens aren’t ready to breed yet, so their first stop in the morning is usually a feeding area, such as this winter wheatfield. Gobblers will follow. If your roost hunt doesn’t put a bird in the bag, circle ahead of the flock and set up. Position several decoys of each sex well within gun range, and call aggressively.

3. Midmorning
When breakfast is over, turkeys leave open areas to loaf in security cover, such as a grassy, brushy creekbottom like the one shown at left. Flocks that separate during the day are likely to do so here. Set up where it’s open enough to shoot, stow your dekes, and rely on more aggressive calling to make a tom come looking for you.

4. Early Afternoon
Eventually, hens will get hungry again and head for an afternoon food source, like this oak ridge. If you’re allowed to hunt past noon, scratchings can tell you where to set up, as can the drag marks left by strutting toms. Place two or three decoys in the mature timber where they’ll be highly visible.

5. Late Afternoon
Still haven’t scored? Where legal, you might be able to catch a gobbler heading back to the roost. The trick is setting up close to the flock’s favorite homeward route–which, of course, you cleverly pinned down by preseason surveillance. Early-spring toms gobble frequently before fly-up and are vulnerable to a call. Even if you don’t fill your tag, though, you’ll know exactly where to go in the morning.