Turkey Hunting: Three Ways to Hunt Gobblers Out In Fields

Field-loving longbeards can drive you mad. They seem so vulnerable, loafing there in plain sight. Yet in fact they’re very... 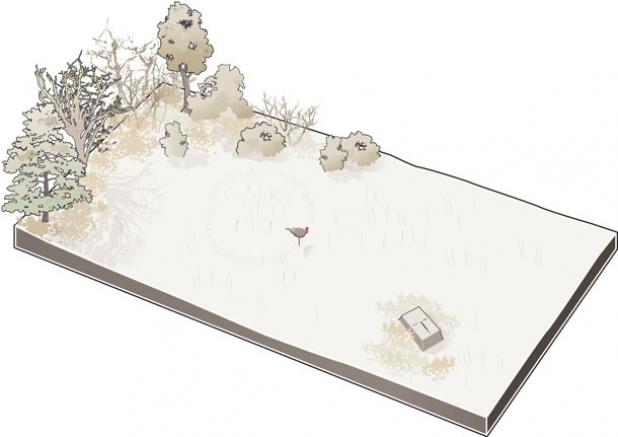 Field-loving longbeards can drive you mad. They seem so vulnerable, loafing there in plain sight.

Yet in fact they’re very tough to get close to, and just as difficult to call in from a long distance. You can put your tag on a wide-open gobbler, however, by using one of these three tricks.

1. Use a Field Blind

Forget that layout blinds are designed for waterfowlers. Their low profile makes them perfect for hiding in an open field, whether you’re after geese or turkeys. Models featuring two flip-open doors are best. They offer plenty of room to store your gear and work your calls, and they let you rest your gun’s barrel on a padded bar that keeps the muzzle pointed downrange.

Well before first light, head for the spot where your gobbler likes to strut. Set up the blind, camouflaging it with just enough natural cover or raffia grass–such as ­Avery Outdoors’ KillerWeed ­(avery​­outdoors.com)–to break up its outline. Then put out a single hen decoy. Keep your calling subtle. When the gobbler shows, slowly raise the door high enough to aim and shoot through the opening.

Field toms often roost just inside the timber at the edge of their favorite field. Use binoculars to spy on a distant gobbler as he retires for the night. Note the roost tree and his flight path to it. Chances are good he’ll fly down along the same route the next morning.

Long before dawn, leave your bedroom and sneak into his. It’s a bold move, but if you can get within 50 or 60 yards undetected, you’ll be sitting pretty. Use a deer grunt call to cover your approach as you walk the woods’ perimeter. Once you’re under the bird’s flight path, slip to the field’s border and stake a decoy about 10 yards out. At sunrise, let the tom gobble a time or two before you yelp quietly. If he answers, get your gun up.

Sometimes a gobbler’s routine, combined with the particular terrain, cover, or property lines, makes it all but impossible for you to go to him. In these cases, you must convince the bird to leave the security of his familiar wide-open field and travel to a distant wooded edge or hedgerow where you can set up undetected. It’s a tall order–but it can be done, thanks to the drawing power of multiple fakes. The sight of eight or 10 “turkeys” palling around off yonder can be too much for a tom to resist.

Put your gang of decoys on a high spot along the rim of the field, where they’ll be visible to the distant gobbler. During midseason, stake a full-strut gobbler deke within easy gun range, scatter mostly feeding-position hens nearby, and expect the real tom to confront the fake one. As the season dwindles and tired gobblers grow less combative, remove the strutter and go all-hen. At a time when many females are nesting, and thus largely unavailable to toms, a gang of “girls” can bring that longbeard running.