12 of the Best .22 LR Ammo Choices for Hunting and Competition

Get the most out of your .22 and pick up a box or a brick of these high-quality ammo options 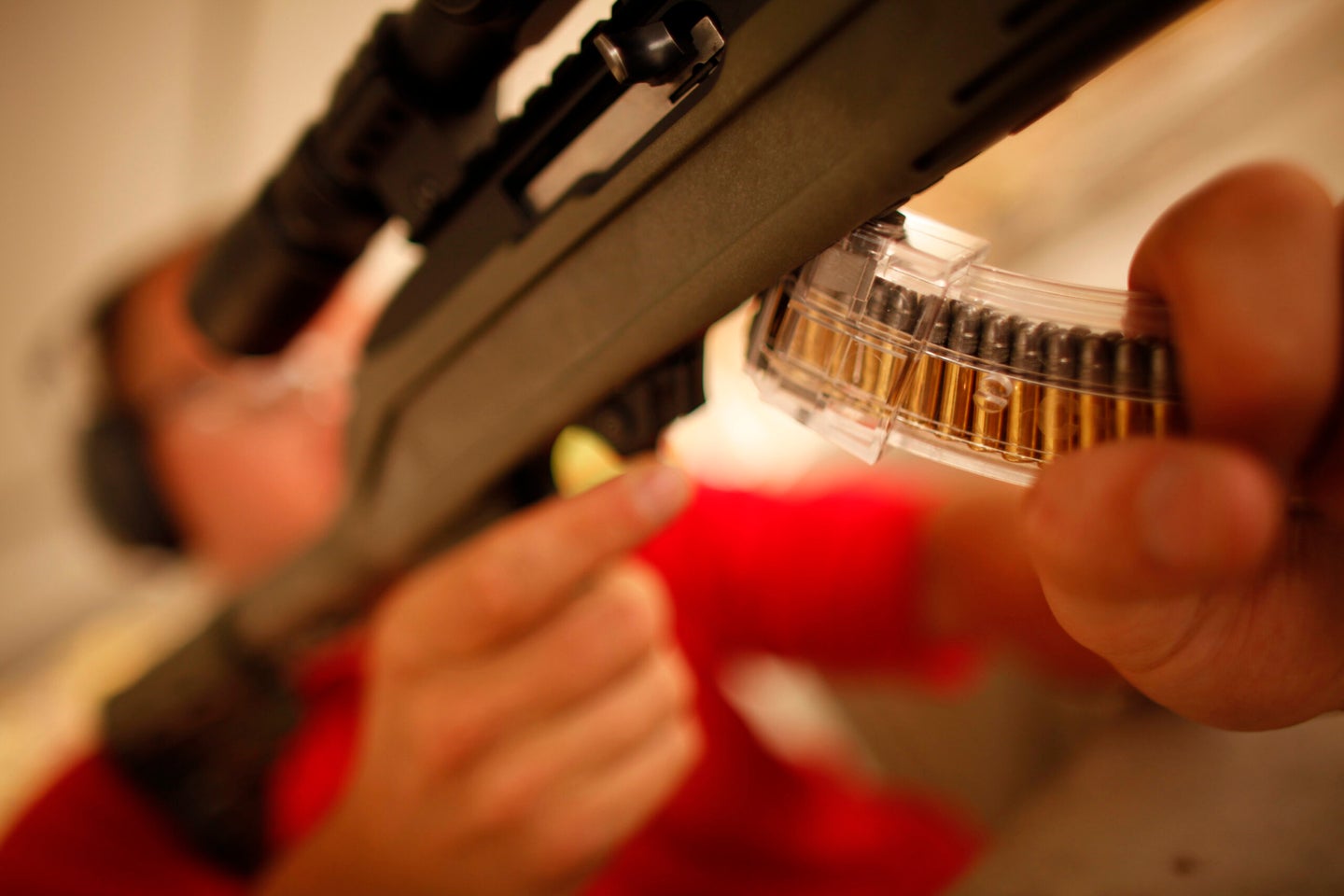 Relegate that ancient case of .22 LR ammo you’ve been hoarding since childhood to plinking in the backyard. High-quality ammo for real work in the squirrel woods, or at a rimfire match, has never been more available. Here are 12 great rounds for hunting and competition that will make grandpa’s old rabbit gun, or your newfangled match rifle, shoot all the better.

Most hunters miss long shots small game because they don’t know their distance or can’t compute bullet drop. High-velocity ammo is the solution. CCI Stingers, for example, don’t drop past 2 inches until 107 yards. (Two inches being about the size of a squirrel head.) CCI Standards, that run 570 fps slower, drop more than 10 inches at that distance. That’s the difference between making a clean kill shot, and missing the tree completely.

Aguila Super Extras represent incredible value for hunting rounds that shoot very well. This Mexican ammo maker bought their priming process from Eley, which is widely considered the best in the world. Aguila wasn’t on my radar until I got a CZ that wouldn’t shoot the usual suspects well. That gun loved these Super Extras, and I loved the price. Aguila also makes a whole lineup of .22 LR oddities—60-grain subsonics, 420 fps powderless 20-grainers—that are great fun to mess with. Viva Mexico!

Back in the late 1960s, CCI rolled out the first hyper-velocity .22 LR ammo, and hunters everywhere sent handwritten cards of thanks. From a pure performance standpoint, it’s still the best hunting ammo out there. CCI did this by changing the .22 LR case specs—making it a shade longer so they could stuff more powder into it—and lightening their proven 36-grain hollow point to 32 grains. The result was a veritable laser beam not seen in .22 LR before or since. But not all rifles can shoot them with that lengthened case. Today, most bolt guns run them fine (check your owner’s manual), and most autoloaders do not. Some rifle barrels don’t group them well at all, either—a drawback to all that speed. But if your small game gun chambers them, and prints a ¾-inch group at 50 yards, order a case of Stingers and never look back.

Designed for specialists, this new 2019 round from CCI has one real purpose: hunting with a suppressed 10/22. The original CCI Quiet’s didn’t have enough juice to cycle America’s favorite blow-back rimfire. These are 125 fps faster and run in autoloaders just fine. I’ve put them through a Volquartsen and half a dozen 10/22s here in New York, but the ammo didn’t really shine until a suppressed August squirrel hunt in Kentucky. Pull the trigger, and the only sound is the bolt cycling—and a tree squirrel falling from the sky.

Read Next: The New .22 Competition Craze

At 1,250 fps, this ammo is the fastest Eley says they can push the .22 LR and maintain their high-standard of accuracy—which still shows when you shoot groups with the stuff. The famous Eley beeswax lubricant isn’t here. Instead, they use a thin petrol-based lube, making the ammo noticeably less “wet” than Eley’s match ammo. It’s my first choice in hunting loads in the 1,200 fps class, for any accuracy-obsessed hunter who wants hollow points. It shoots cleaner than most other .22 LRs, too, and has that sweet smell of blown British primers.

Everything about this sub-sonic load is the same as the high-velocity Eleys above, except there’s a lighter powder load, making for a slower bullet and less noise at the shot. If you hunt with a suppressed bolt gun, this is your ammo.

The aptly named hyper-velocity Yellow Jackets have a flat-nosed design, like some of the very best match bullets, but with a deeply-cut, hollow-point channel. The effect on game is dramatic. These killer rounds approach the speed of the Stingers, but without the extended case. They chamber well in a regular .22 LR barrel, and shoot in most autoloaders, too—with a catch. You must replace the recoil spring with something heavier to manage the pressure of these hyper-velocity rounds. Springs are widely available, and the work can be done in six minutes at a kitchen table with minimal tools. Two of my rifles shoot Yellow Jackets awesomely, so that’s all they shoot.

The best match .22 LR ammo consistently groups the smallest in your rifle, at the distance you compete. A load that makes bug holes at 50 yards might look like a shotgun pattern at 100. Finding the right ammo for your sport and barrel is a process, but go to any high-level silhouette, NRL22 or benchrest match, and someone on the line will be shooting the stuff below.

At a nickel a round, a brick for $25 and a case for less than $250, CCI Standard should not shoot as well as it does. Ruger 10/22s love the stuff. It’s my go-to round for speed games like Rimfire Challenge and my first stop when ammo testing rifles and barrels for longer games like NRL22. It’s the best inexpensive .22 LR ammo in the universe.

Read Next: 8 Match-Ready 22 Rifles for Any Budget

At the last Olympic games, 14 out of 18 shooting medals were taken with Eley tenex. My best group ever was shot on my home range with tenex. My Lithgow LA101 put ten rounds in basically the same hole. I cut the group out and carry it in my wallet. Detractors argue the flat-nosed bullet doesn’t hold its accuracy at longer ranges. Maybe, but this bullet was made to do one thing: win gold at 50 meters. And it does. I’ve personally also shot very good groups with it at 100 and 200 yards. If you’re serious about competition and spending this kind of money on ammo, it pays to visit the Eley Customer Test Range in Winters, Texas. They let buyers test lots to find what best matches their barrel. Killough Shooting Sports will do it for you too if you mail them your rifle and commit to buying a case.

This might be the most popular match ammo today. Lapua makes more expensive loads, but collective wisdom says none of it shoots appreciably better than Center-X in most rifles. It was, by far, the most used ammo at the NRL22 National Match in May. Partly because the most popular rifle, the Vudoo V-22, is chambered for it. Like Eley, if your gun really likes Lapua, and you’re serious about competition, send the barreled action to Lapua, get a lot recommendation, and never think about ammo again.

It’s fashionable in rimfire circles to poke fun at Remington’s inexpensive .22 LR ammo, but it’s a mistake to discount it completely. Some guns shoot it remarkably well. At my gun club, the fellow who runs silhouette shoots these in his Henry. No, they don’t group like Lapua, but in lever-action silhouette, the accuracy variance round-to-round is the least of a shooter’s concern. I put some through my Henry to try it out, and it shoots them great. I like to keep some in my range bag, so when know-it-alls bring up Remington, I can outshoot them with it.

SK is a sub-line of Lapua. The ammo is made in the same factory, and it shows. SK represents an excellent value for shooters whose rifles like the Lapua family of ammunition. Standard Plus is about the best deal in real match ammo going. I don’t own a rifle that doesn’t shoot it well. The Rifle Match and Long Range stuff also shoot excellently in many of my rifles.

For the better part of a year, this has been my go-to ammo for precision rimfire shooting. Hunt around online, and you can find bricks for as low as $60 or $0.12 per round. At 50 yards, it shot as accurately or better than anything else I’d tried, until I tried tenex. The Russian-owned ammo was made by Lapua forever, but in the last year they switched to Eley—it’s even head stamped with the famous Eley E. I’ve found Wolf accuracy comes undone at 100 yards, and downright falls apart at 150, but that doesn’t change the fact that it’s a 50-yard show stopper. There’s always a brick or two of the stuff on my ammo shelf.