How to Kill a Limit of Squirrels in August 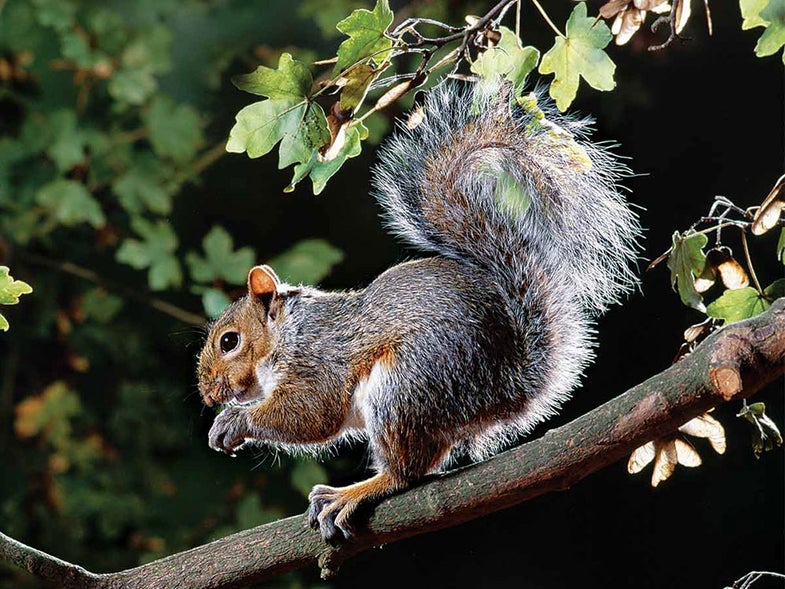 August, sophomore year at Murray State—I was skinning squirrels in the dorm parking lot when a classmate walked by. I’d never met him, but he was wearing a faded camo shirt and boots. He was obviously a kindred spirit. “Where you going?” I hollered at him, wiping my blade across my pants. He was carrying a to-go tray from Wins­low Cafeteria.

“Getting closer to a crapper before I attempt to eat this slop,” he said. “My guts still aren’t used to it.”

“Come over here and help me with these squirrels, then,” I said. “I got three good young ones, all out of hickory nut trees. We’ll fry them in the community kitchen.”

He smiled and introduced himself as Ryan McCafferty. “Shoot,” he said. “I’d as soon eat a squirrel as steak.” He tossed the dinner tray into my truck bed, where it rode for some time, and opened his own pocketknife. “Were they cutting good?” he asked. “Because I keep a little .410 in my Jeep, if you want to go again.” 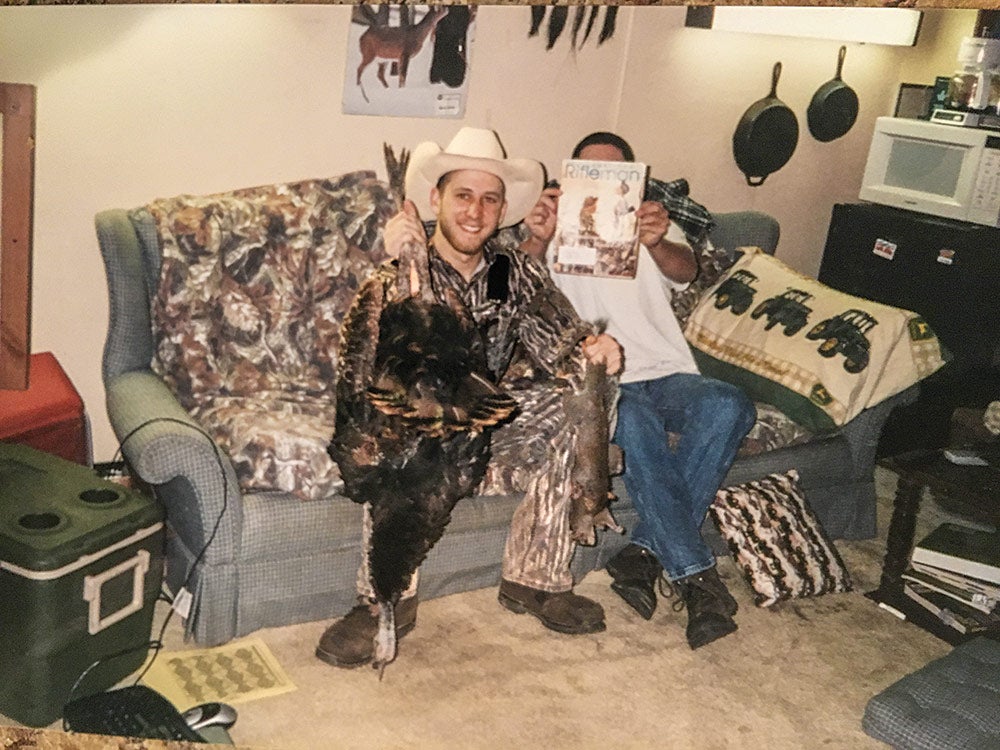 Dorm Life: Brantley (left) and one of his buddies with two squirrels and a fall turkey, taken before class at Murray State.

The next morning, a few hours before class, we cut through a thin fog and across a cattle pasture into a 20-acre block of hardwoods. I’d hunted there the last half hour of light the evening before, and I’d have sworn most of the gray squirrels in Kentucky were piled into half a dozen shagbark hickories on the edge of that woodlot. It was already 80 degrees.

“Man, look at the shavings in here,” McCafferty whispered. He picked up a piece of green hickory husk, freshly chewed by a squirrel. Within a minute, leaves rustled overhead and a golf ball–size nut came bombing out of the canopy. A squirrel flashed into view, leaping from one limb to the next. Neither McCafferty nor I said a word. He simply eased the little single barrel to his shoulder and thumbed the hammer back with a dull, metallic click. The gun popped, and the squirrel crashed to the ground with a thud. Soon another limb shook overhead, and this time it was my turn to shoot.

With all the hoopla surrounding dove and early goose seasons, you’d think every hunter in the country were finishing up a prison stint on Sept. 1. But the first hunting opportunity in much of the eastern U.S. begins weeks before that, with squirrel season.

It’s a great time to hunt. Young gray squirrels born in early summer are freshly weaned and scurrying about in late August. Hickory nuts are beginning to ripen, and squirrels will crowd into the best trees in search of the sweet, new mast.

Finding a good place to hunt is easy. Just about any block of mature hardwood timber will probably have a few hickory nut trees and plenty of squirrels. I prefer to scout in the evenings and hunt in the mornings, since August squirrels seem to be most active during the first two hours of daylight. There are a dozen or more hickory species in North America, but two of the most common—and preferred by squirrels—are the shagbark hickory and the pignut. Both have spearpoint-shaped leaves, and the trunk of a shagbark is covered with rough, scaly bark. Learn to identify both types of tree, and then simply walk from one to the next, inspecting the ground underneath. If squirrels are feeding in a particular tree, the ground underneath will be littered with pieces of white-and-green hickory nut hull. Set up near such a tree just before shooting light, and action is all but guaranteed.

A shotgun is the most effective tool this time of year. McCafferty likes sneaking in close with a Full-choked .410, loaded with 3-inch No. 4 shotshells. I prefer a 20-gauge—also choked Full—and a 1-ounce load of No. 6s. You can tumble squirrels out of towering hickories with that combo.

A scoped .22 rifle makes things more interesting. The challenge in August lies not in getting within range but in picking out a clean shot. Often, you won’t be able to see much more than a squirrel’s head in your crosshairs—but a crack marksman like you won’t need to see anything else.

McCafferty and I have squirrel hunted together every season in the decade since we graduated. Last fall, we leaned against his Jeep, sipping coffee and watching the morning sky soften on another opening morning. Used to be, while we waited for shooting light, we’d talk about classes, girls, and beer. Now, we talk about our kids and our jobs.

With just enough light to see, we slipped into the woodlot with guns in hand. McCafferty carried his trusty .410, and I’d even cleaned my .22 the night before, in anticipation of the opener. We didn’t have to wait long before limbs shook overhead, and a hickory nut came crashing down to the forest floor.

When you’re hunting the humid hardwoods in August, you’re going to need to stay hydrated. I’ve been carrying a HydraPak Full-Force 2L system, which is about the perfect size to drop into a daypack. It has a squeeze bulb with plenty of pressure—and a dust cover—so you can grab a quick drink and spray the squirrel hair and blood off your hands, knife, and meat at the end of the morning.

This story appeared in the August 2017 issue with the headline “Autumn in August.”