We put the year’s new flagship compound bows to the test in our annual four-day grudge match. Here’s how they stacked up 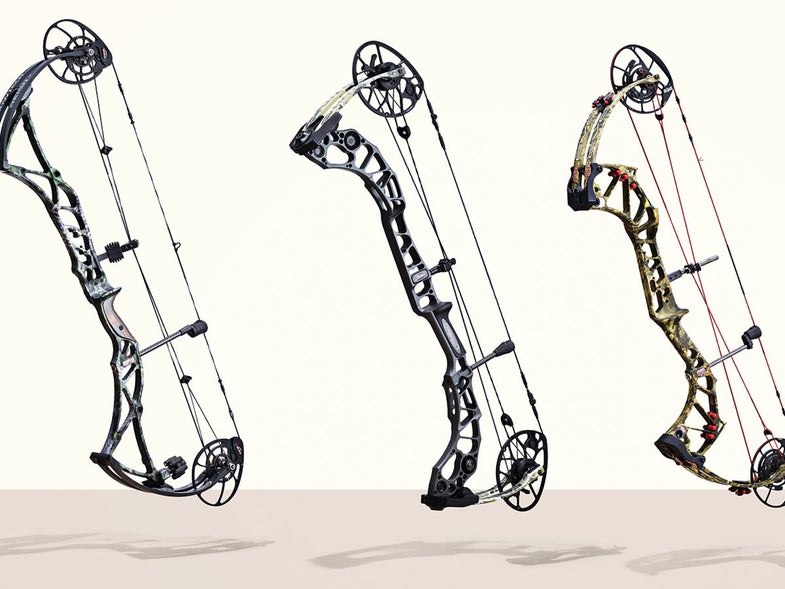 Back in March, F&S deputy editor Dave Hurteau traveled to Kentucky to meet with me and former archery pro-shop owner Danny Hinton for our annual flagship bow and crossbow shootout. As always, we spent four full days shooting, measuring, taking notes, crunching numbers, and arguing. Lots of arguing. This year, the crossbow test was dominated by a newcomer that simply blew away the competition—even though the competition was strong. The compound test was a much tighter race, with only 2.5 points separating the top three. Here’s the scoop.

First we fit each bow with a Trophy Ridge Whisker Biscuit rest and React sight. We set the draw weight at 60 pounds and the draw length at 28 inches. Next we measured speed by shooting a Victory VAP 400 arrow weighing 364 grains (finished) through a chronograph three times and taking the average. We gauged bow noise in the same manner, using a decibel meter. Then we hit the range for two days, shooting hundreds of three-shot groups on Rinehart bag targets set at 30 yards, to measure out-of-the-box accuracy and forgiveness. All the while, we evaluated draw cycle, shock and vibration, balance and handling, and fit and finish. We awarded up to 10 points per category and then doubled the key ones—speed, draw cycle, accuracy—for a total possible score of 100 points.

Best of the Test: Bowtech Reign 6

After stumbling off the podium in 2016—the first time out of our top three in at least six years—Bowtech is back on top. While there’s nothing radically new about the 2017 flagship, the Reign puts all of the brand’s best technologies (Overdrive Binary Cam system, FLX-Guard, Center Pivot riser, and Powershift) into a near flawless package that’s smoother shooting than last year’s BTX. Tested in the FlipDisc2’s comfort setting, the bow finished in the bottom third in speed but made up for it by notching perfect or near perfect scores in almost every other test category. And if it’s raw velocity you’re after, all you have to do is flip the disc to the performance setting, in which the Reign would have finished second for speed.

Without ever firing an arrow, we knew Mathews had a great shot at a repeat title because the Halon 32 is the same bow as last year’s winning Halon, just 2 inches longer. That means everything we loved about the 2016 flagship applies here. The Crosscentric Cam system, stout dual-bridge riser, and parallel limbs combine to produce something rare and coveted: a superfast bow that’s really nice to shoot. It won our speed test, took second in both draw cycle and shock and vibration, and third in accuracy and forgiveness. The 32’s extra length improves the string angle but also adds a little weight to what was already a bulky bow—and it was that unhandiness that barely cost this stellar bow the win

The Evolve is like no PSE flagship you’ve shot in recent years. For the last decade or so, PSE bows have been known for raw speed, but also for draw cycles with little to no valley. Performance junkies loved it, but many hunters didn’t care to hit the woods with a bow that seemed to want to yank their arms off at full draw. The Evolve changes all of that. The new cam system offers up to 90 percent let-off, with an ultra-generous valley. It’s the most ­comfortable-​­shooting PSE we’ve ever tested, tying for first in draw cycle and noise, and taking second in accuracy and forgiveness. It’s not exactly slow at 292.7 fps, and it costs $150 less than the two top finishers, making it a great value.

After unveiling a smooth-shooting single-cam flagship in 2016, Xpedition is back in the dual-cam speed race. The Xcursion nearly tied for second place in a tight speed test. It was perfectly dead in the hand at the shot, and everyone loved its looks, balance, and feel. Yet, a last-place finish in noise, a slightly bumpy ride as the cams turn over, and average performance on the range knocked it out of the top three.

A redesigned 82X aluminum riser, the Centergy’s most touted feature, centers the grip precisely on the bow’s balance point to help you hold on target longer. And it works. The Centergy won in both accuracy and forgiveness and balance and handling. It has a great draw cycle, too. The bow was dead last on speed, but for the roughly half of you who don’t care about the chronograph, take note: This is one smooth and accurate shooter.

The Pro Defiant handles like the short bow it is but draws and shoots with the comfort of a longer model, thanks to an innovative design that optimizes string angle at full draw, encouraging proper shooting form. It notched a perfect score in fit and finish. But the bow’s next-to-last marks in speed and in shock and vibration knocked it down. Still, the Pro Defiant tallied decent scores otherwise and was one of the quietest bows tested.

We have dinged Obsession in the past for listing, shall we say, “optimistic” IBO speeds. But not this time. Finishing as runner-up to the Mathews in raw speed, the Hemorrhage lit up the chronograph. But the power comes at a price: The draw cycle is more demanding compared with past models, and the bow is not as dead in the hand. That said, it has a concrete back wall and a decent valley for a speedster.

Elite touched the gas last year with the Impulse and produced a fairly fast bow that was still nice to shoot. This year, it pressed the pedal a little harder—maybe a bit too hard. The Option 6 is fast, quiet, and dead in the hand, but for the first time, Elite ranked near the bottom in draw cycle and balance and handling. Two of us found it difficult to shoot, but one tester shot it better than everything else. Try it for yourself.

The Moment is fast—only 4.4 fps off the speed winner. Despite that, it’s both quiet and fairly dead in the hand. We all liked the way it handled, and it settled in pretty well on target. And yet our arrows wouldn’t go where we’d aimed them. The Moment’s last-place accuracy and forgiveness score killed it. It also ranked last for fit and finish. But we liked the price. If you’re on a budget, try this bow at a range. It’s a bargain if you can shoot it well.

Can’t refinance the house for a bow? Here are two non-flagship standouts

This kind of performance is unheard of at this price. Honestly, I liked the Turmoil as much as Obsession’s new flagship, and it’s $300 less.

It’s a carbon-riser bow for under $550 that also happens to shoot really nice. For all you guys who dig short-and-light, this is a steal.

RELATED: The Best Hunting Gear of 2017