Blast from the Past: Baikal MTs-8 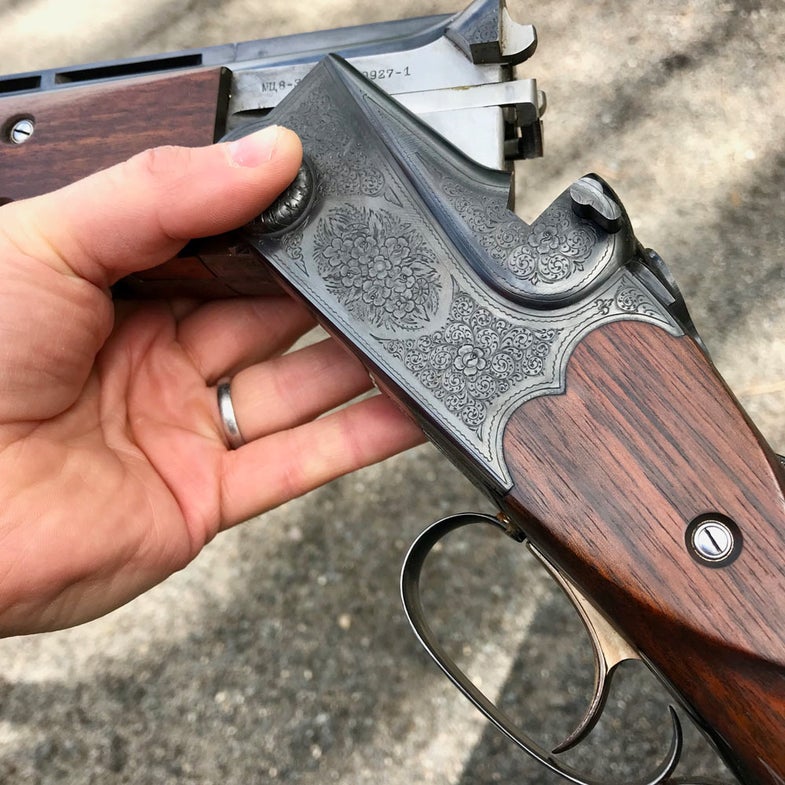 A close look at the receiver of the Baikal. Gregg Elliott
SHARE

Today’s “Blast from the Past” comes from Russia. Made in 1965, this firearm is an MTs-8 target gun with two sets of barrels—one for trap and one for skeet. The maker is variously known as Vostok in some places, Baikal in others.

Shortly after World War II, the Soviet Union joined the sporting-arms race against the West to show they could build a Russian target gun that could defeat decadent Western firearms in the Olympics. The TsKIB SOO (“Central Research and Design Bureau of Sporting and Hunting Guns”) came up with the gun you see here. Built around an extremely strong action, with a massive monoblock that provides acres of bearing surfaces for strength, it also has the crossbolt locking design of the German Merkel (at the time being made behind the Iron Curtain, by the way). As a result of its design, it is tall and ungainly. Even though the better grades have pretty good engraving, parts of the gun are held together with large and inelegant slotted screws and the wood tends to be plain. It was clearly a Russian gun, it was not a thing of beauty, and it would never fall apart, and it won.

This gun comes with a set of trap and skeet barrels. The skeet barrels feature a special jug choke the Russians invented called the Tula choke (after the Tula Arsenal) that featured an extreme overbore behind the choke. The internal dimensions were patterned after the old Cutts Compensators that used to be popular among U.S. skeet shooters. The design is supposed to open patterns and lengthen shot strings, making it easier to hit close range skeet targets. I have never believed long shot strings made shooting easier, but seeing as how Yevgeni Petrov won Gold in Skeet in 1968 and Silver in 1972 with one of these guns, perhaps the Russians were right and I was wrong. For a short period of time in the ’60s and ’70s, the Russian guns won, and a lot of people copied the Tula chokes. Although Baikal/Vostok still makes target guns, Russian national team shooters now shoot Perazzis just like everyone else.

Thanks to fellow virtual-ink-stained wretch Gregg Elliott for sending these pictures along. Gregg is the shotgun and shooting editor for Project Upland, and his website dogsandoubles.com is a highly worthwhile site of alerts about good doubles for sale around the country. Keep the gun pictures coming to fsgunnuts@gmail.com.

Shotguns
Blasts From the Past
Shooting