This past weekend I attended a demonstration given by a Civil War re-enactor who gave a blood-curdling example of what...

This past weekend I attended a demonstration given by a Civil War re-enactor who gave a blood-curdling example of what mid-19th-century artillery could do. His armament was an artillery piece called a James Rifle, so-called because it was invented by a Union General named Charles James, and because it had a grooved bore as opposed to a smooth one. James Rifles were scarce; they were made for only a few years, and the fact that this one survived and is still usable is something of a miracle. 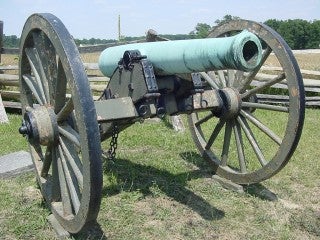 There was a Type I and a Type II. The earliest examples were bronze, but the rifling wore out quickly and the later Rifles were iron. Weight was 915 pounds; the 3.8-inch bores had 7 to 10 grooves, and the guns fired a 14-pound bolt (as elongated projectiles were then called) backed by a pound and a quarter of black powder. We were told that the maximum range was 2,000 yards, although the official max is given as 1,530.

The re-enactor demonstrated the Rifle on an NRA 200-yard target, which has a 13-inch bull. We wondered if he would be able to hit the backstop, much less the target, much less the bull. The Type II James Rifle has a distinctive front sight in the form of a pyramid. Using this in combination with an optical rear sight, he lined it up and let ‘er buck.

The noise, even with a reduced charge, was sphincter-loosening. A cloud of pus-yellow smoke obscured the target (and everything else) and when it cleared, there was a 4-inch hole directly below the bull. The second shot went into 9 o’clock, even closer, and the third took out the bull altogether. You could, by design, shoot a man’s head off with this thing.

The thought occurred to all of us: What was it like to charge a battery of these infernal devices, firing as fast as they could? (A good crew, we were told, could get off 10 shots in a minute.) It did not even bear thinking about. And we all wondered, where did the soldiers who did it for four years get that kind of courage?