Bourjaily: Would You Buy a Bullet From This Man?

The scary looking slab of muscle in the picture is the Federal’s new spokesman for Fusion ammunition. If you’re a... 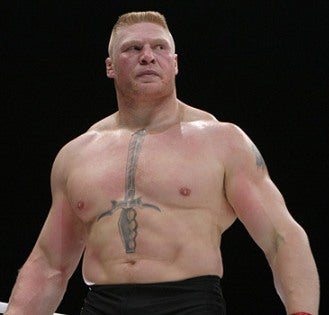 The scary looking slab of muscle in the picture is the Federal’s new spokesman for Fusion ammunition. If you’re a member of the all-important 18-34 year old demographic, you probably recognize Brock Lesnar, who says he’s the right spokesman for Fusion because it’s an “edgy, badass” product. If you’re middle-aged or older, you may have to be told that Lesnar is the Mixed Martial Arts (MMA) fighter who currently holds the Ultimate Fighting Championship (UFC) heavyweight title.

MMA combines several fighting disciplines – you can punch, kick, grapple and apply submission holds. It is huge right now, especially among younger people. The line to get Lesnar’s autograph at the Federal/ATK booth at SHOT stretched far down the main aisle of the giant Orlando Convention and Visitor’s Center. Lesnar is one of a number of popular MMA fighters who are highly visible hunters and shooters (Matt Hughes and Tim Sylvia are two others). For the hunting industry, MMA is the new NASCAR.

I can see MMA’s appeal, but it’s not for me. I would rather watch football and basketball. If I have a sports idol, it is the professorial Kareem Abdul-Jabbar, who retired after 20 stellar NBA seasons without a single tattoo to write books on black history and join the Single Action Shooting Society. However, I am Old School and out of date, and what I like becomes less relevant every day. Hunting needs to remake its image to recruit the next generation. If that means fewer Brett Favres as spokesmen and more edgy, badass Brock Lesnars, I’m okay with that.

So, I’m curious : who out there is an MMA fan? And would you buy a bullet from Brock Lesnar?

Coincidentally, I used a Fusion bullet on the one and only head of big game I have ever shot with a centerfire rifle. The critter was a large feral hog on southern California’s Tejon Ranch, the rifle was a CZ .30-06, and the range was 125 yards. The bullet punched through the shoulder bones, tore up all the important stuff, and lodged in the gristle shield on the far side. The pig fell over without taking a step. When we recovered the bullet, we found it had expanded perfectly and retained 90-some per cent of its weight. One perforated pig isn’t much to go by, but that’s what I know about Fusion ammo.