Fresh, hot biscuits, anyone? It’s hard for me to imagine a meal in any fishing or hunting camp without some...

Fresh, hot biscuits, anyone? It’s hard for me to imagine a meal in any fishing or hunting camp without some of these tender, flaky morsels soaking up melted butter or swabbing a plate clean of that last bit of gravy. There have been days–and this might be one–when I’d kill for a good biscuit. 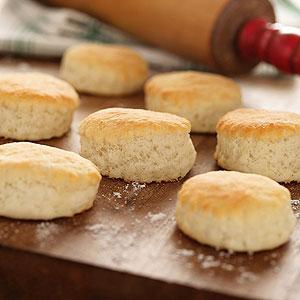 Biscuits are easy to make, yet require a deft touch so they don’t get tough and lumpy. Lard or shortening must be cold as it is crumbled through the flour so things don’t get mushy. When milk is added, don’t beat the dough to death or you’ll toughen it. And the oven must be very hot when the biscuits go in or they won’t rise properly.

The kind of flour makes a difference, too. So-called “soft” flours common in the South such as White Lily or Martha White have fewer gluten-forming proteins than Northern flours and thus rise better in the oven and become flakier. The distinction is so noticeable that I buy southern White Lily flour by mail order for our own use here at home. That company’s website also includes some excellent recipes in case you’re now feeling motivated.

Yes, you can also use Bisquick, the common biscuit pre-mix. I’ve done that in a pinch, like the time a few years back when I made a big batch of chicken-and-biscuits for some hungry trout fishermen (myself included) in Colorado that had everybody cleaning their plates.

And there are lots of minor variations in both recipes and the way biscuits are used. Gina Scaff, who used to cook for bass fishermen at Florida’s fabled Bienville Plantation, once made me some “Bienville Biscuits” by slicing biscuits in half, then pouring a beaten egg over them in a frying pan–sort of eggs and biscuits all in one. There were, she said, some Neanderthals who poured Karo syrup over the mixture before eating.
I agreed that was criminal, and allowed as how up north here our biscuit syrup, if any, comes from maple trees….