Merwin: The Right Grip for Baitcasting

How’s your grip? By that I mean specifically the way in which you hold a baitcasting reel and rod to... 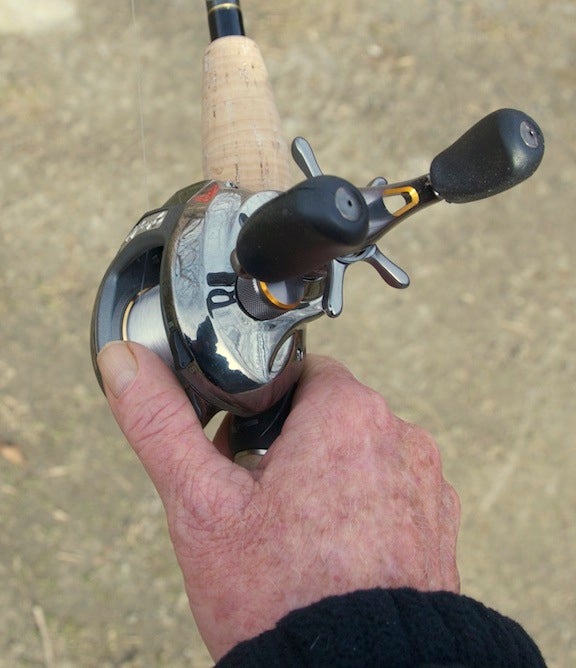 How’s your grip? By that I mean specifically the way in which you hold a baitcasting reel and rod to make a cast. It’s often true in fishing that what seems simple and obvious isn’t so simple after all. A baitcasting grip is a good example.

Notice in the photo that I’m holding the rod and reel so the reel’s handle is on top or uppermost. My thumb rests partly against the reel frame and partly against the spool. This hand position also puts the first knuckle of my index finger (where it joins my palm) on top of the rod, where it will deliver most of the casting force.

This is all contrary to what I see most people doing. (Frequent readers here will not be surprised at the contrariness.) The most common baitcasting method has the reel handle to the side and the reel upright. The rod is held in a two-handed grip that allows the casting thumb to rest in the middle of the spool.

I like my approach better. Here’s why. First, having my casting-hand knuckle on top of the rod allows the most casting force with the least effort. The typical grip on a golf club, tennis racket, or baseball bat is the same thing: The first knuckle of the power hand is in line with and driving the club or bat. So why not with casting, too?

Second, the handles-up grip allows much easier and more precise thumb control of the reel spool. That’s because my thumb is partly supported by the reel frame. To thumb the spool while casting, all I have to do is rock my thumb very slightly inward easily and very naturally. With a handles-to-the-side grip I have to lift my unsupported thumb up and down, which is much more awkward.

Finally, and with handles up, the rod grip is supported by all four fingers underneath and the heel of my thumb on top. It’s comfortable and gives easy control. Casting is easy, even without using my left hand on the rod butt in a two-handed grip. With a handles-to-the-side grip, however, lifting your thumb off the spool to release the cast also lifts the heel of that thumb off the rod. The rod itself is then less supported and it’s almost impossible to cast one-handed this way.

Such are the arcane fishing things that keep me awake at night. So as long as I’m awake anyway, tell me how you cast: reel handles to the side, or handles up?