There are two reasons why a pencil popper is one of my all-time favorite topwater lures. One, nothing swims like...

There are two reasons why a pencil popper is one of my all-time favorite topwater lures. One, nothing swims like them. That high-riding, slap-forward, far-spitting action is second to none, and there’s no finesse necessary…wind hard and whip it good. Second, pencils are big-fish baits, so when one gets crushed, it’s likely a fat striper, hog pike, or mondo largemouth on the other end. But in recent years some lure makers began experimenting with pencil hybrids, and I have to say that I’ve gotten really into them.

Pictured above is the IMA Big Stik. I’ve just recently started playing around with this lure, but I already know I like it. It was developed with lunker largemouth in mind, and though it looks like a standard pencil, the mouth scoop is a little different. Though it still carries its weight in the butt and thus flies for miles with a sharp cast. The Big Stick combines the walk-the-dog twitch with a pencil’s forward slap. It rattles and the paint jobs are simply rad. 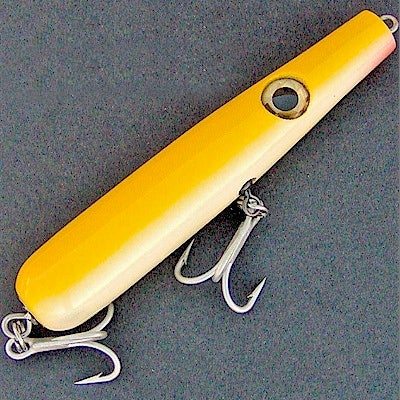 Tattoo’s Walking Stick (left) was introduced a few years ago, and since builder Mike Dauphin sent me some of the first batch, I’ve rarely been without one on the water. As previously noted, pencil are big-fish lures, but not this one. At about 4 inches, the Walking Stick has fired up everything from tuna to smallmouth to one big-$%* brown trout for me. You can make it gently slide, or get the nose slapping up and down like a woodpecker on speed.

Finally, a nod to Daiwa’s Saltiga Pencil (below). Over the last two seasons, I’ve boated a bunch of stripers in salt- and freshwater, plus a few nice largemouth on this pencil hybrid. It doesn’t have the same profile as a traditional pencil, and doesn’t run exactly the same, either. It floats tail down, but leaps forward straight across the surface rather then smacking forward and falling back to a vertical position. I particularly dig the air holes in the open gills that siphon water through to create a mean bubble trail. – JC