A Wisconsin bass angler recently got a little more than he bargained for when a coyote grabbed the plastic frog... 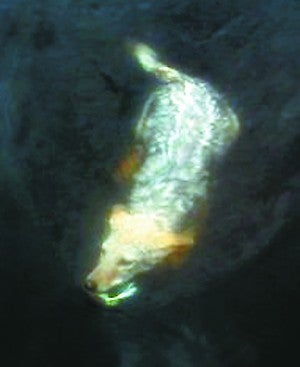 A Wisconsin bass angler recently got a little more than he bargained for when a coyote grabbed the plastic frog he was working the shoreline with. I repeat: the dude caught a coyote on his grass frog.

From this story in the Lacrosse Tribune:
_Anglers might have a tendency to stretch the truth sometimes, but it’s tough to top Bruce Chandler’s fishing story. The Holmen bass fisherman two weeks ago was casting an Ish’s Phat Frog fishing lure in a Mississippi River slough near Goose Island when a coyote sprang from the tall grass on shore, leaped into the water and latched onto it. “In a blink of an eye, it was that quick. It looked as shocked as I was,” said Chandler, 62. The adult coyote, estimated at 25 to 30 pounds, pulled one way, Chandler the other. “All I thought was that coyote had my $9 frog that I had just bought and I wanted it back,” said Chandler, who used his trolling motor to pull the coyote into open water. “Once I got it out of the weeds and into open water, it became pretty submissive,” Chandler said.

Chandler used his cell phone to call his fishing partner, Darren Zumach, who was fishing in the same area. “Darren asked me what I was smoking when I told him what I caught,” Chandler said. Zumach arrived in about 10 minutes. “I never saw anything funnier. Here was Bruce, holding onto the pole and motoring slowly down the slough, with the coyote trailing behind,” said Zumach, 43, of Onalaska. “I took a picture with my cell phone because I knew nobody would believe us if I didn’t.” Neither man wanted to kill the coyote, only free the hook from its mouth and save the fishing lure. They said they felt sorry for it.

Chandler handed Zumach a pair of long, needle-nose pliers, which he used to remove the lure from the coyote’s upper lip. “The hook came right out. I was surprised the coyote didn’t snarl or try to bite me,” Zumach said. The exhausted animal instead grabbed onto Zumach’s trolling motor. Chandler used his boat to gently push Zumach’s boat backwards toward an island, where the coyote managed to crawl up on shore. “The coyote shook itself, rested a minute or so and then just walked away,” Chandler said._