Merwin: Go to Niagara, But Not For the Falls

So last week I went to Niagara in northern New York. And no, I did not look at the falls.... 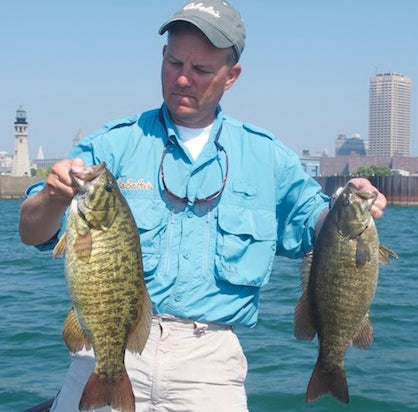 So last week I went to Niagara in northern New York. And no, I did not look at the falls.

Instead, and in a fit of extreme dedication, pal Chuck Smock and I elbowed our way past the region’s abundantly attractive women, wonderful restaurants, and comfy hotels in order to go fishing. This was a very good idea, as evidenced by the pair of jumbo Lake Erie smallmouths Smock is holding in the photo. The Buffalo, New York, city skyline is in the background.

We took those bass and others like them from both Lake Erie and Lake Ontario as well as from the Niagara River that flows for 35 miles between those two Great Lakes. As if that weren’t enough, we took a few hours off one afternoon to troll the open waters of Lake Ontario, where in very short order we caught a couple of big king salmon. It was almost sinful.

I don’t think I’ve ever been anyplace else where the fishing is so good for such a multitude of freshwater species in one small region. First, eastern Lake Erie and western Lake Ontario are not far apart–only about 25 miles–so it’s easy to fish both. In addition to smallmouths and king salmon, other available fish include Atlantic salmon, coho salmon, brown trout, lake trout, steelhead, pike, walleyes, and muskies. The salmon, trout, and steelhead are big-lake open-water fish until late fall and winter when they stack up in or off the mouth of the lower Niagara River.

For all this largess, I like the bass fishing best. We were lucky enough to fish with two excellent area bass guides, both of whom I’d recommend heartily: Capt. Frank Campbell and Capt. Terry Jones. For open-water trolling, Capt. Bob Cinelli and crew, fishing out of Olcott, New York, were exceptionally capable at getting us on big fish very quickly (716-860-9774). For more general information, check out Niagara Tourism.

Meanwhile, I’m figuring out when to go back. Smallmouth on topwaters during the spring spawn, I think. Capt. Frank tells me that’s generally from mid-May to mid-June, sometimes extending into early summer. Big smallmouths. Slam! Pow! Zowie! I can hardly wait….