Merwin: Lost at the Net

As the Arizona Cardinals mounted a stunning fourth-quarter comeback in yesterday’s Super Bowl, I was exhilarated, just as I might... 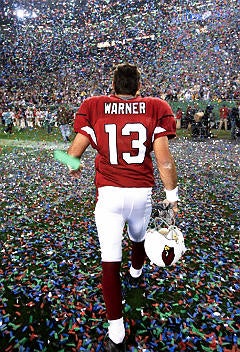 As the Arizona Cardinals mounted a stunning fourth-quarter comeback in yesterday’s Super Bowl, I was exhilarated, just as I might be if I were about to slide a really big fish into a landing net. And when the Pittsburgh Steelers claimed the game in the final two minutes, it was as if that big fish had suddenly broken the line and escaped.

I am reminded of a very large striper I once hooked on light tackle while fishing from shore on Cape Cod. After a long, nip-and- tuck battle I finally had the fish near shore, its massive back out of water in the rolling surf. At that point I was hoping too much and too soon. The single-hooked lure simply dropped from the fish’s jaw, and the line went slack. With one big sweep of a giant tail, the fish was gone. I was crushed.

Big fish are often lost at the net or just as we are otherwise about to grab them. These are also the fish we tend to remember best with a rueful smile, thinking of what might have been. So I’m left wondering. Do the big ones always get away?