Here’s a fun item I picked up from Trinidad and Tobago Express News. On February 27th, James Jagroop, fishing in... 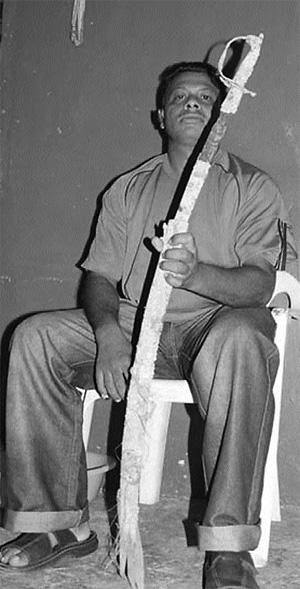 Here’s a fun item I picked up from Trinidad and Tobago Express News. On February 27th, James Jagroop, fishing in six feet of water, snagged and landed this barnacle-encrusted sword still in its wooden sheath. Speculation as to its origin, and how it ended up in such shallow water so close to shore, are flying wildly.

The most popular theory is that a drag-netter snared it offshore and unknowingly pulled it to its final resting place. Others believe it could be the sword of Sir Walter Raleigh, who supposedly pulled into the local shallows to fix a leaky hull in 1595. Jagroop could care less. All he’s asking is, “what’s it worth?” The answer is not yet known.

I know people who have snagged some pretty cool stuff, like a rusted-out .38 pistol in the Hudson River, and a glob of seaweed to which was attached a giant fossil shark tooth. Sad to say, the most exciting thing I ever snagged was a lawn chair. Oh, and a fishing net that nearly spooled me on the troll. So what’s the most notable treasure you’ve hauled up from the depths of the lake, river, or ocean? Anything worth keeping?