Few feelings in life can match it when you are going out there. The narrow trail unfolds before you, cut... 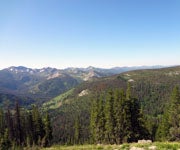 Few feelings in life can match it when you are going out there.

The narrow trail unfolds before you, cut into a steep sidehill that descends down–down a half-mile into a thicketed creek bottom, where through breaks in the willows and head-high elderberry and nettle, you can see the creek, tumbling whitewater and bits of long, green pools where you know the cutthroat trout have never seen a fly or a bait. The trail goes on and on, and around a bend, still high above the valley, there’s a long roll of last winter’s snow on the ridge far above you.

The view opens out. Forever.

The wild slopes of brush reaching to the heavens are crowned with endless lodgepole pines. The creeks down there meeting, building a river in a wide-forested valley center-shot with a torrent of whitewater shoals, canyons, deep blue holes, endless meadows and parks that look like God’s own version of elk country. The view goes on into a mist-shrouded distance, beyond your eyes’ ability to take it all in–no road to shatter the mystery of big wilderness. It’s a place where you travel on the terms of the land. This is Kelly Creek, central Idaho. When I think of backcountry bear hunting, Westslope cutthroat trout fishing, elk hunting or wandering in silence and utter freedom, this is the landscape that fills my imagination first.

I took a trip to Kelly Creek this summer with Scott Stouder, of Trout Unlimited; his wife Holly Endersby, of Backcountry Hunters and Anglers; and Gary Peters, a Florence, Mont. outfitter. We went there to fish, walk the old trails up the tributaries and ride some of the high country. Kelly Creek is part of the headwaters of the famed Clearwater River–the cold, silt-free waters that call those giant sea-run steelhead up the Clearwater every year.

This is the Idaho side of the Great Burn country, where monstrous forest fires rage–beginning in the drought year of 1910 and continuing through the even drier and hotter Dust Bowl years of the early 1930s. Firestorms of an intensity never witnessed by human beings before or since turned more than three million acres of forest into cinder. No roads were push into this region of the country because it was burned so hard that there was no timber to harvest. About 1.2 million acres remain roadless here, one of the planet’s last great expanses of truly wild country–set like a foundation stone as part of two million acres of public land. No place offers more opportunities for the American hunter and fishermen. Alaska may have bigger expanses, but much of that will be accessible only by costly boat or float plane trips, and much will be locked in frozen limbo for most of the year.

The Clearwater country holds the northern Bitterroot Mountains, which are well watered by rain and snow, awash in flowers, grass, creeks teeming with fish and thickets trembling with wildlife and birds. It is a rich, low altitude landscape tied together with ridges and valley trails that make for reasonably easy traveling for the strong and the willing. For Scott and Holly, who live southwest of here on the Rapid River, this country has become the focus of a big part of their working lives: teaming up with a diverse band of Idahoans–hunters, wildlands advocates, snowmobilers and Congressmen–to establish a permanently protected 250,000 acres of wilderness.

“A long time ago, Trout Unlimited realized that without real protection for the headwaters of these major river systems, they would always be playing catch-up in a rigged game,” says Scott. “They recognized that it was not necessarily trout fishermen that were in the backcountry, where all these creeks began. It was mostly elk hunters, bear hunters, people looking for trophy muleys. Those were the people who most wanted to see these places stay the way they are now. So they started looking to hire some hunters to work with them. And that’s how they found me. I’m not saying I don’t like to fish. I do. But my real love is elk hunting. That’s what Holly and I do every year, and that’s why we have the pack string, the mules and horses, and all the gear. We’re hunters and we know lots of other hunters who want to see this country protected for future generations of hunters.”

Scott and Holly are both in their early 60s. They say they know that there will be a day, in 10 or 15 years, when the wilderness will be too much for them.

“When that time comes, I’ll know that it’s out there for a new generation of elk hunters,” Scott said. “If we can get this protection in place, if I can rest knowing that it will always be out there like it is now, I can go to my grave a contented man.”

We saddled up on the Montana side of the line, at the end of the road on Schley Mountain and set off. Come and ride with us.