Let it Flood: How We Can Create a Fishing and Hunting Paradise, Lower the Deficit and Clean the Waters All at Once

On May 31st, Congress gave the much-despised Federal Flood Insurance Program an additional 60 days of life. They did it... 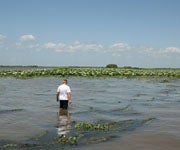 On May 31st, Congress gave the much-despised Federal Flood Insurance Program an additional 60 days of life. They did it because, even though it is common knowledge that the Program is an epic money-waster, 5.5 million Americans (including me and a lot of people reading this) who live in flood-risk areas depend on it for a safety net. Nobody wants to see the program die, and nobody wants to see it continue as it is written now.

It’s a 1960’s era nanny-state debacle that encourages people to build homes and businesses in places where they’ll be wrecked by floods, over and over again, while the rest of the dry-land dwelling American public picks up the tab to the tune of $38 billion in claims since the program began; $200 million every year, often to rebuild structures that have been flooded out numerous times. The program went $18 billion into debt after Hurricane Katrina in 2005. The cost of the record-breaking 2011 floods to U.S. taxpayers is as of yet uncalculated. How do we fix this flabby devil of a federal entitlement? That is a question that every American taxpayer, hunter, fishermen, and outdoor recreationist needs to understand.

The more-hidden costs of all these homes and businesses in floodplains is becoming painfully obvious, too: Taxpayer-built levees that cut off rivers from their floodplains and ruin wildlife and fisheries have confined rivers that function as drainage ditches instead of nourishing the land. Untold tons of pollutants — from farm fertilizers and chemicals to livestock waste to the dribblings of a million faulty septic tanks sunk in low lying ground — are all flowing into our rivers.

Federal Flood Insurance has incentivized development that diminishes our fish and wildlife nurseries, and causes indirect impacts on the wetlands that filter and hold our most precious resource: water. These are the floodplains and wetlands that should be our natural protections from the kind of devastating floods that have occurred over and over again, like the ones in 1973, 1993, 1997 and 2011 (just to name a few). These floods have cost taxpayers billions of dollars and are largely understood, now, as man-made, avoidable disasters.

When one fills wetlands, the water has to go somewhere else; when you confine a river that once spread out over a huge floodplain, it tends to have some negative effects downstream. On a huge scale, this is, in part, why the Dead Zone in the Gulf of Mexico, that monstrous shifting cloud of low-oxygen water, soupy with nutrients and the algae blooms that feed on them, exists. This is why we have the largest land-loss disaster on the planet in the Louisiana Delta, threatening oil and gas production, our busiest port system, our largest seafood industry and our waterfowl wintering grounds. There are economic costs in continuing with a terrible idea, long after it is known that the idea is bad.

The Federal Flood Insurance Program will be renewed on May 31. Too much depends upon it — there’s a whole economy at risk (what a tangled web we weave when first we practice to have the government protect the things we should protect or not build ourselves). But it will be reformed, too, because in the wake of the floods in 2011, the boondoggle is lying there for all to see: Plain and stinking as the carp stranded by receding floodwaters in towns like Roundup, Mont.

Senator David Vitter, a Republican from Louisiana, and Senator Jon Tester, Democrat of Montana, have a good plan (Senate Bill 1940, or the Flood Insurance Reform and Modernization Act of 2011) that should pass. The bill is supported by everybody from Taxpayers for Common Sense and the Competitive Enterprise Institute to the Nature Conservancy and the National Wildlife Federation (which has been trying to get people to understand the relationship between ruining rivers and wasting public money since 1998, when NWF published Higher Ground, the best study ever done on the topic).

For sportsmen, it’s not just the reform of the Flood Insurance Program that is important, although as taxpayers in a nation crushed with federal debt, it is more than welcome. What is most important is that these reforms finally begin to recognize the value of the natural systems that give us, free of charge, our fishing, hunting and freedom, clean waters for boating and swimming, and all the basics for an outdoor and sporting life that can carry on through generations.

Let’s use the mighty Mississippi River as an example. The epic 1927 flood, immortalized in songs and folk tales, began an era of federally funded levees, channelizations, dredging and diking that was well-meaning at the time. The good men and women of the U.S. Army Corps of Engineers knew that the projects would result in land loss, increased flooding downstream, etc., but the short-term benefits outweighed the possible negatives. Over the years, as the Corps became an institution, and using taxpayer money to control rivers became the norm, the negatives were forgotten or carefully ignored. We have leveed over 2,000 miles of the Mississippi watershed, cutting it off from its floodplain. We are now living in that long term that the Depression-era engineers did not consider. The negatives have arrived. The bill is overdue and accruing interest like a mobster loan shark.

As the St. Louis Dispatch editorial page wrote it on Aug. 27, 2010:
“For thousands of years, the Mississippi River provided fertile habitat for millions of birds and fishes along its 3,000 miles.

Then came the U.S. Army Corps of Engineers, damming and channeling the big river until it assumed its form today: A giant barge canal, mostly devoid of animal life.”

It is a canal prone to catastrophic floods. Not just because the levee systems and the Federal Flood Insurance Program has encouraged people to develop in the floodplains, although that is true. Because a flood like the one that occurred in 2011 is a NOT a natural disaster. They are decidedly unnatural disasters created by a century of over-engineering a natural system.

“The way the Corps of Engineers is trying to manage the river for navigation now, with all of these wing dikes, and rock structures that are meant to make the channel scour itself and relieve the need for dredging, you have increased flood heights in many places of 10-15 feet — enough to over top levees and cause widespread damage even in moderate floodyears,” said Melissa Samet, a senior water resources specialist with the National Wildlife Federation.

Obviously, nobody is suggesting less shipping or navigation on the Mississippi River and its tributaries. It is one of the greatest water highways on earth, carrying the world’s food supplies and the commerce of a nation. Navigation is a given; how to ensure that it continues is the question. And in that, the Corps of Engineers fails in a spectacular manner.

“What we are seeing is, in lieu of actual restoration, the Corps is building higher walls, bigger levees, an incredibly expensive infrastructure that destroys wildlife and fisheries and passes the flood trouble downstream, sometimes doubled,” said Samet.

That downstream trouble reached crisis proportions in 2011, when every available dredge was commandeered to try and clear the main shipping passes of the Mississippi River. Millions of tons of silt from the confined river struck the tidal flows of the Gulf of Mexico and came to rest in Southwest Pass, blocking shipping. The Corps operated dredges around the clock. By July, fairly early in the flood, the Corps’ entire budget for dredging was exhausted. An act of Congress was required to allocate more money to keep the operations running. The millions of tons of silt that could have been used to rebuild the vanishing delta was lost, too, dredged up and either dumped or carried by the current into the deepest part of the Gulf. The pass silted in, anyway. If nothing else will change our way of looking at the problem, Louisiana hydrologists say, the rising price of diesel fuel for the dredges will make the current model impossible to maintain.

The answer is not even that complicated.

“Since the 1993 flood disasters, there have been FEMA buyouts of about 40,000 homes and properties that have been repeatedly flooded,” Samet said. “More buyouts of properties in the floodplain can be a start.”

It does not take more than a couple of flood years to pay for the buyout, rather than pay, endlessly, all the public costs associated with people living in places that flood over and over.

Levee setbacks are next, allowing the river to occupy more of its floodplain, deposit its silt in a more natural way, and have wetlands and swamps that absorb polluted runoff. There will be issues with agriculture in high water years on these floodplains, but there could be a net benefit for farmers on these lands in the long run, in the rich deposits of silt that renews cropland.

“This is something that the ancient Egyptians had all figured out in the breadbasket along the Nile,” Samet said. “They knew that without the floods, the land required more fertilizer than they could provide, or productivity dried up.”

Who will do all this work? The U.S. Army Corps of Engineers and a legion of small and independent contractors. The mission of the Corps was always supposed to be a “three-legged stool” — navigation, flood control and restoration. The Corps has done the first two legs well, right up to the point where we understand that the first two cannot continue without the third.

The hunting and fishing bonanza lies not just in radically restored fisheries and wildlife populations, and not only in helping to halt the massive loss of marsh and land in the “Sportsman’s Paradise” of Louisiana. The bonanza lies in the tens or hundreds of thousands of acres of floodplain reserves. Waterfowl populations will soar. Fishing can be as good as it was in Mark Twain’s days. Whitetails, turkeys, squirrels and every other wildlife species will return to the bottomland forests that once soaked up all of this water.

Not all of these lands will be accessible to the public. A lot of them will be, potentially creating an enormous heartland of public lands devoted to what is now termed “ecosystem services” i.e., flood control, water purification through swamps and wetlands. Imagine all of it teeming with fish and wildlife, and the economies that those resources could help to cultivate and sustain.

The U.S. and its hunters, fishermen and taxpayers could all see an enormous net gain, instead of watching billions of dollars of public money lost every flood year, or experiencing evacuations and tragedy and loss of homes and livelihoods. So could the thousands of people who will find jobs working to restore the tributary creeks that have been straightened and the swamps that have been drained.

It is the path of the 21st century — harkening back to Sir Francis Bacon (one of the most important influences on America’s third President Thomas Jefferson) who wrote in the early 1600s, “For nature to be commanded, it must first be obeyed.”