USFWS Photo Tom Vilsack has $1.2 billion of VC money in his pocket. And he’s looking to spend it. No,... 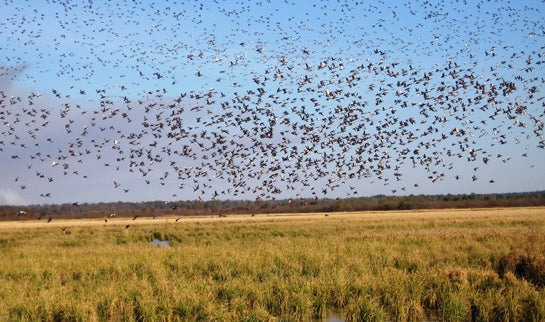 Tom Vilsack has $1.2 billion of VC money in his pocket. And he’s looking to spend it.

No, the Secretary of Agriculture hasn’t suddenly turned into a venture capitalist. But he is applying that business model in an effort to invest in new and more places and people to conserve the nation’s land, water, and habitat.

What Secretary Vilsack has become is what he calls a “Venture Conservationist.” And if your conservation project meets certain standards, he’ll buddy up with you — and hand you some of that $1.2 billion.

Authorized in the recent Farm Bill, the Regional Conservation Partnership Program is a totally new way to find and award funds to conservation-minded people and groups who may not otherwise know that they’re eligible.

The idea is to have the Dept. of Agriculture partner with public and private entities– companies, universities, non-profit organizations, local and tribal governments, agricultural organizations, and yes, sportsmen’s groups–who have proposed ways to improve soil health, water quality and water use efficiency, wildlife habitat, and other related natural resources on private lands.

Last week, Field & Stream had an exclusive interview with Secretary Vilsack about the development of the RCPP, how it works, and how it will benefit fish and wildlife habitat.

Executive Editor Mike Toth: What prompted the creation of this program?
**
Secretary of Agriculture Tom Vilsack:** A desire to encourage grassroots involvement and activities, and to form new, creative partnerships to expand conservation opportunities in this country. We’re fairly confident that when you combine agricultural producers, farmers, and ranchers with people that care deeply about habitat expansion because they like to fish or hunt or enjoy the outdoors with corporations that have a vested interest in continued ag productivity–people who are interested in clean water and healthy soil–the sky’s the limit in terms of creative ideas. The idea is that if you encourage the grassroots to think about this collaboratively, you’re going to have better projects, you’re going to have better results, and you’re going to have improved conservation.

Toth: The name “Venture Conservation” borrows a term from the business world. What does the name represent and why did you choose it?

Sec. Vilsack: it’s not unlike a venture capitalist who is looking for the new deal, the new product, the new way of doing business and is willing to invest resources in making it happen. You may be sitting in a corporate CEO office, or you may be the head of a foundation–you may not think of conservation as something that you have a direct interest in. So we’re trying to make sure that people understand that there’s a new way of doing business.

Conservation isn’t just about the Federal government acting as a catalyst toward an individual producer. The Federal Government has the capacity to act as a catalyst toward the development of partnerships that will leverage federal dollars effectively, lead to investments made by food companies, investments by foundations, investments by conservation groups, by those who represent hunters and anglers. In doing so, you can leverage the federal resources more effectively, you can create a suite of conservation practices that are embraced in a watershed area, and that you can have profoundly better results by this approach.

This is a new approach to conservation. We’re hopeful that we attract folks that are interested in investing in that different approach.

Toth: You’re trying to reach other people–different from the people you would typically deal with.

Sec. Vilsack: That’s right. Basically, we’re always going to be able to reach out to producers– to farmers and ranchers–because they obviously have a vested interest in their own property and improving the condition of soil. All farmers are concerned about water quality and quantity. But there’s a growing awareness on the part of many that agricultural land and forested areas of this country represent 75 percent of the land mass of the United States; that weather patterns are changing, becoming more intense, storms are more problematic, droughts are longer, floods are more serious, storms are stronger; and all of that has an impact on habitat, it has an impact on crop production.
Whether you’re someone who likes to hunt and fish or you’re somebody who wants to feed the world, you’ve got a stake in making sure that land and water is doing what it needs to do. It awakens in people an understanding that they have an interest in conservation, even if it’s activities occurring on a farm and you live in the city. Your life is impacted by what happens on that farm, because you like drinking clean water, you like going out on a fall day hunting pheasants, or you love being in the serenity of a trout stream.

Toth: What would you say is the biggest challenge in the different Critical Conservation Areas?

Sec. Vilsack: It’s the challenge that we have with water in this country. In some cases, there’s not enough of it; in some cases, too much of it; and in some cases, the quality of it. Conservation has a direct relationship, whether it is on agricultural land or forested land, in conserving and preserving scarce water resources, allowing water flow to be less problematic, and to improve the quality of the water.

Toth: It seems that the benefit to everyday hunters and fishermen is pretty obvious here; it’s a big-picture approach.

Sec. Vilsack: It is. The benefit that accrues in this is three-fold. We’ve talked about two parts of it. We talked about the benefit to farmers and producers because they’ve got better land and cleaner water. We’ve talked about it in terms of those that need habitat in order to enjoy the outdoors. But this is also a job creator. Conservation is responsible for over 660,000 jobs in this economy, and if you’re a hunter or you’re an angler, there’s no doubt you’re going to a location that is a ways away from where you live or work. You’re going to be spending your money. You’re going to stop at your local hardware store to pick up some shells or you’re going to go to the local bait shop, or stay in a hotel, or eat at a local restaurant after a long day of hunting or fishing. All of that creates economic activity in rural areas that are very much in need of economic activity. So it’s not only for the benefit of the natural resources, it’s also for the economic consequences of all of this.

Toth: What is an example of an RCPP project that will benefit fish and game?

Sec. Vilsack: I’ll use the example of the migratory bird program that was established as a result of the Gulf Coast disaster. The oil spill occurred and that threatened the migratory bird populations that used that Gulf Coast area. We went into play in a very large way following the oil spill. We identified 400,000 acres of land in the Gulf Coast area that could be converted into wetlands that would provide a habitat for those migratory birds. It was phenomenally successful to the point that the duck population significantly increased. That creates a heck of a lot of hunting opportunities up and down that flyway. So now, designating the Dakotas, for example, and parts of Minnesota as Critical Conservation Areas opens up a huge opportunity for us to replicate that in the northern part of the flyway. That’s just an amazing opportunity to substantially improve duck hunting in the central part of the United States.

I can tell you that in my own home state [of Iowa] they are starting to see fish return to rivers and streams, and that’s due in part to some of the conservation efforts within the Upper Mississippi River Basin Initiative, which was sort of a forerunner to this.

Toth: From someone who grew up on the Jersey Coast, and is familiar with Barnegat Bay and the problems that are going on there with fertilizer runoff, it seems that even though the Bay is not in a Critical Conservation Area, this program would benefit a lot of problem areas in this country and might help turn up some new ones.

Sec. Vilsack: That’s right. There’s nothing preventing that area from basically establishing its own, in essence, regional conservation program. It could be run by a state and it could encourage local habitat groups, conservation groups, environmental groups, producer groups to come together, and put together their own program.

I think we’ll learn a lot from these Critical Conservation Areas. We were required by law to limit this to eight. I fully expect and anticipate that this is going to be successful and eventually every part of the country is going to have an opportunity.

Toth: Is there something that you want people to walk away with?

Sec. Vilsack: Walk away with the notion that this is an example of what the federal government does well, which is act as a catalyst for change. When you put $1.2 billion on the table over the next five years, you set up a competitive process in which all 50 states compete for the national money. Each state is going to receive a share. We are basically challenging those local and state folks to come up with their most creative and best ideas with our money, and we’re expecting you to put up your money. It’s a catalyst for change. We know this is going to improve conservation.