Here’s one from the “Watch Your Backcast” files: The artist known as Christo has won approval from the Colorado State... 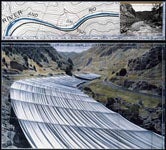 Here’s one from the “Watch Your Backcast” files: The artist known as Christo has won approval from the Colorado State Parks Board to erect almost six miles of fabric panels over parts of the Arkansas River.

From this story on Forbes.com:

The Colorado State Parks Board approved an agreement Friday for the artist Christo to pay $550,000 to state parks to carry out his Over the River project, which would suspend 5.9 miles worth of fabric panels over parts of the Arkansas River. However, the agreement is moot if the Bureau of Land Management doesn’t approve a federal permit for the project. The BLM hasn’t made its decision yet. Christo’s project would use heavy equipment to help erect a system of cables and anchors to hang the fabric along U.S. 50.

Over the River, which Christo envisioned with his late wife, Jeanne-Claude, has drawn support from art lovers but frustration from some wildlife advocates and river businesses. Opponents say hordes of tourists checking out the project and the work needed to erect it could stress wildlife, choke traffic and disrupt hunting, rafting and angling business. In May, Colorado wildlife commissioners voted 9-0 in favor of sending a letter to the BLM opposing the project and urging federal officials to adopt measures to ease potential effects on bighorn sheep if they do issue a permit to Christo.

The state chapter of Trout Unlimited has also voiced its concerns over the project, as have a host of state and local conservation groups. The display is projected to be up for a two-week period in the summer of 2013, but it’s the environmental impact of the extensive prep work and hordes of tourists that have groups worried.

So is this art, or is it an egotistical, ill-advised pain in the a** that at the very least will inconvenience a lot of people and at worst has the potential to cause significant environmental harm? What say you?