—Chad Love Who can forget the amazing footage of the Japanese tsunami sweeping literal mountains of debris into the ocean?... 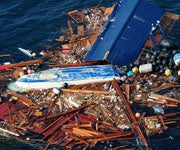 Who can forget the amazing footage of the Japanese tsunami sweeping literal mountains of debris into the ocean? Now scientists say all that debris – millions of tons of it – is slowly making its way to the west coast.

From this story on mercurynews.com:
Millions of tons of debris that washed into the ocean during Japan’s catastrophic earthquake and tsunami in March — everything from furniture to roofs to pieces of cars — are now moving steadily toward the United States and raising concerns about a potential environmental headache. Scientists using computer models say the wreckage, which is scattered across hundreds of miles of the Pacific Ocean, is expected to reach Midway and the Northwestern Hawaiian Islands by next spring and beaches in California, Oregon and Washington in 2013 or early 2014.
_
“Can you imagine San Francisco put through a shredder? A big grinder?” said Curtis Ebbesmeyer, a Seattle oceanographer who has studied marine debris for more than 20 years. “The area north of Tokyo was basically shredded. We are going to see boats, parts of homes, lots of plastic bottles, chair cushions, kids’ toys, everything.” The debris is moving east at roughly 10 miles a day, and is spread over an area about 350 miles wide and 1,300 miles long — an area roughly the size of California — Ebbesmeyer estimates, with the leading edge approaching the international date line._