—Chad Love U.S. and Mexican authorities are still searching for survivors after a chartered fishing boat carrying 44 passengers and... 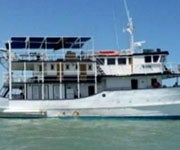 U.S. and Mexican authorities are still searching for survivors after a chartered fishing boat carrying 44 passengers and crew capsized after being caught in a storm off the coast of Mexico.

From this story on ABC News:
The U.S. Coast Guard and Mexican Navy are scouring the Sea of Cortez by boat and helicopter in a continuing effort to locate the seven U.S. tourists still missing after the sinking of a charter boat off the coast of Mexico Sunday. One U.S. tourist died. The Coast Guard will be using a larger aircraft in its search today that is capable of covering greater distances, U.S. Coast Guard Petty Officer Pamela Boehland said. The Coast Guard expects to be up in the air over the Sea of Cortez around 10:30 a.m. PT. The Mexican Navy is expected to deploy the same two helicopters it has been using.

_
Seven Americans are still missing, according to Mexican officials. The identity of the dead man has yet to be released. The boat, carrying a total of 44 passengers and crew, capsized when it was hit by two giant waves, according to Capt. Benjamin Pineda Gomez of the Mexican Navy. Twenty-seven Americans and 16 crew members were on board the 115-foot-catamaran, which was called the Erik and was operated by the tourism company Baja Fishing. The vessel was supposed to take the group and crew on a week-long vacation — an annual Fourth of July outing for a group of friends from Northern California — but it was caught in a thunderstorm and capsized around 2:30 a.m. Sunday, about 60 miles south of San Felipe, in the Mexican state of Baja California._